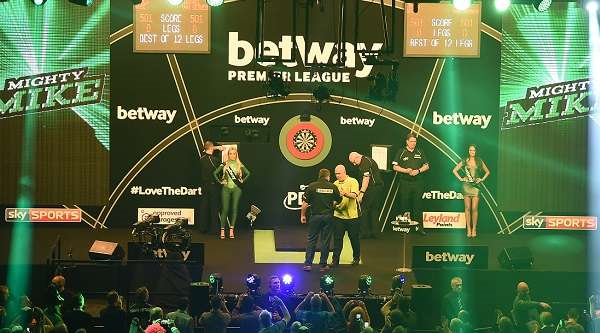 In a golden oldies’ play-off, Phil Taylor averaged just under 106 against an almost equally impressive Raymond van Barneveld. In the end, Taylor proved too much for Barney this time, running out the 7-3 winner.

Having put in one of his best performances of the season, “The Power” moved (momentarily) into third place. Barney, who threw an average of over 100, saw the end of a run of four straight wins.

Although he needed to work for it, the world number one beat James Wade in a classic match that went right down to the wire. Wade was unlucky to lose and almost claimed a draw.

Despite Wade averaging over 110, Mighty Mike’s class was available to him when he needed it to be.  In true MVG style, he was able to strike an average of over 113, landing a 138 checkout in the final leg to beat Wade 7-5 and remain the Premier League leader.

A game just as thrilling, if not as matched for quality, was the 6-6 draw between Peter Wright and Dave Chisnall. Both averaged over 100 and yet neither really took control of the game in the way they would have hoped to.

For “Snakebite” especially, this will feel liked dropped points. “Chizzy”, who looked a lost player only weeks ago, will rue losing the last three legs of a game he looked set to win.

An earlier defeat was quickly rectified by Raymond van Barneveld (who would move back up to third and overtake Taylor) following a second match of the evening in which he destroyed James Wade 7-2.

With RVB again averaging 100, Wade had little in the way of a response and simply couldn’t call on any of his unrewarded, brilliant form from earlier in the evening. He succumbed to a second Dutch defeat.

The biggest surprise of the night was served up when Adrian “Jackpot” Lewis as ran out a comfortable 7-3 winner against Gary Anderson, giving himself a decent – and surprising – shout for a top four finish.

World number two Anderson was in uncharacteristically poor form, missing 18 of his 21 double shots. He now sits level in the table with Lewis, who averaged a respectable 99.76.

This Thursday the players return for the eleventh matchday of the League, this time with Liverpool playing host at the Echo Arena.

The first game of the night belongs to Gary Anderson and Dave Chisnall, with Anderson’s form and top four finish now under threat. Bet365 rate both players as 5/6 to be the first player in the match to break throw.

A rejuvenated “Chizzy” could throw a spanner in the works here, but if Anderson digs deep then the
“Flying Scotsman” should see the match out and claim all three points – vital given his all-star, all-Scots closer against Peter “Snakebite” Wright.

Wright himself faces a tough night playing the world number one Michael van Gerwen in his opener and number two Gary Anderson in his closer. I am expecting Snakebite to end the night pointless.

His form has dipped over the recent weeks, hitting high but missing the doubles, and it’s costing him dear. He can ill afford another winless night here, but I think Anderson (with points on the line) will be dangerous and we can’t expect Wright to best MVG.

Adrian Lewis and Barney will also be meeting this week, with both enjoying wins last time out. It would be an upset, but I’m going for Lewis here.

Form has, for the most part, sided with the Dutchman in recent months but “Jackpot” has thrown his way back into contention, especially in light of his destruction of Gary Anderson a week ago.

Finally, Phil “The Power” Taylor and James “The Machine” Wade meet again following their draw in the earlier rounds – a result likely to repeat itself.

This match is also the provider of SkyBet’s Treble of the Day: Taylor to win the match, hit the outright highest checkout and score more 180s than Wade. That is worth 3/1, or (for the bravest amongst you), 14/1 in reverse.

This week’s recommended accumulator is: Anderson, MVG, Lewis, Draw, Anderson which awards 56.92 to the pound at tournament sponsors Betway.