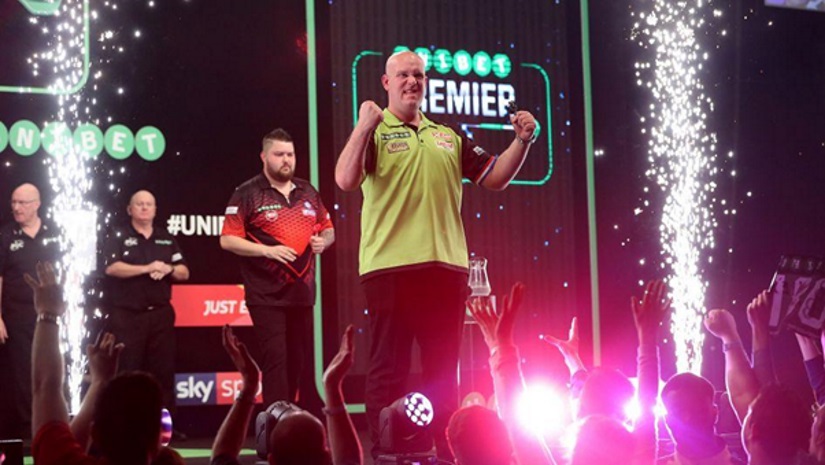 Peter Wright achieved an all too familiar score line, a 7-1 reverse, this time at the hands of Michael Smith, who all but sealed his place in the Premier League play-offs with the win. It was the second time this season that Bully Boy had beaten Snakebite by the margin. Smith himself lost 7-1 only 90 minutes later during his second match of the night, this time against Michael van Gerwen. Smith opened with a 180 and went on to take the opening leg in 12 darts, followed by winning the next three in 13, 14 and 12 darts before Wright finally pulled one back after which Smith went unchallenged.

After suffering double disappointment in Rotterdam last week, Michael van Gerwen needed to dig deep and scrap hard in order to earn a 6-6 draw with Daryl Gurney, which made for a third non-win in a row in this year’s Premier League. It was the 35th game in succession that the usually solid Dutchman averaged over 100, while Gurney averaged dead on 100 almost claiming the victory he needed to keep hopes of a playoff place alive. Going into the last leg with a 6-5 advantage, MVG took a point even after missing three doubles as the match slipped away from Superchin.

By the end of the evening, Mighty Mike put an end to a winless run of three Premier League games by thrashing Michael Smith by the same score line he inflicted on Peter Wright, 7-1. Losing twice in his homeland and only tying Daryl Gurney in Manchester, MVG gave Bully Boy a savage beating despite posting his lowest average of the season and hitting a measly two 180s. Mighty Mike even missed 11 darts at doubles but got away with it as Smith, unrecognisable from his earlier match, won only the last leg to avoid a whitewash.

The night’s most surprising result came in Match three when Simon Whitlock claimed a 7-5 victory and a big upset over Gary Anderson. It was a weird flip of the form book as Anderson, who scored three victories in Rotterdam, lost against a guy who suffered back-to-back 7-1 defeats over the same period. The Flying Scotsman hit just two 180s and posted a disappointing 94.45 average, losing his chance to bag a point when he missed his shot at tops to checkout allowing The Wizard in for the win.

Like Simon Whitlock, Raymond van Barneveld is another player that will be missing out on the London showpiece event after he failed to beat Rob Cross as the pair settled for a draw. Despite getting back to his best in Rotterdam last week, Barney could only hold on for a draw against the World Champ. Even with the disappointing result, Barney did manage to please the Manchester crowd who were firmly behind the Dutchman, by earning a 129 checkout on the bullseye in the fifth leg before Cross steamed ahead. Barney battled back, reeling off three legs in a row to get within a leg of victory before Voltage posted a clinical 13-darter that should take him to the O2 in a few weeks.

We’re off to Birmingham for Night 15 on Thursday at the Arena Birmingham. You can watch at home on Sky Sports Main Event HD and Sky Sports Action HD from 1900 GMT. The night’s first match is a contest between Peter Wright and Simon Whitlock with both players knowing that they can still come in fifth, which if nothing else means more prize money. Other than that, this one’s a damp squib and I don’t especially fancy either right now. In a funny kind of way, the pressure is off Snakebite, which means he will probably end up playing his best of darts of the year. The Wizard did bank a surprise win over Gary Anderson last week — and he could do well again here — but I’m just about siding with Peter.

This match is followed by Daryl Gurney and Michael Smith with Smith, who is fresh from his destruction of Wright last week, as good as qualified. Gurney has been fairly consistent of late and will be focused on the must-win required to keep his play-off hopes alive. We could see Smith, who had a mixed week last Thursday, in auto-pilot mode for this one. Don’t be surprised to see this impact tonight’s performance, meaning Gurney could have a very good chance here.

Next out are Rob ‘Voltage’ Cross and Mighty Mike van Gerwen with Cross needing a point to clinch a play-off spot on the off chance that Gurney does indeed win the previous match. MVG, who doesn’t have to worry about pressure, is already sure of his place in London but will still look to stamp his superiority on the World Champion and prove why he’s world number one. The form shows it to be so too. Cross has only beaten Mighty Mike twice in eleven meetings, losing the other nine. Get more value at Betway by backing Van Gerwen to win and hit a 110+ checkout and Cross to hit the most 180s, which is worth 5/1.

The last game of the night pitches Gary Anderson against Raymond van Barneveld with Anderson needing to win this game in order to seal his play-off spot, assuming Gurney wins earlier in the night. With an upcoming meeting against MVG next week, The Flying Scotsman will want to seal the deal before then, especially as Gurney will be playing Simon Whitlock in a decidedly easier fixture. It was Whitlock who last week interrupted Anderson’s good form with a shock defeat. That should be nothing more than a blip for Gary and I think he’ll be more than OK on Thursday. Go with Anderson to win with a 120+ checkout with over 6.5 total 180s, which pays at 11/2 with Betway.