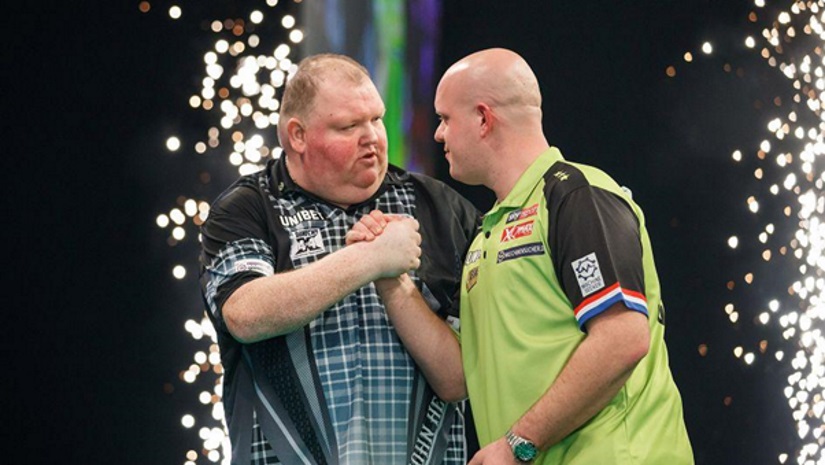 An emotional local contender John ‘Highlander’ Henderson enjoyed one of his most memorable nights on the oche in Aberdeen last Thursday as he claimed an unlikely tie against Michael van Gerwen. The Scottish crowd produced an unbelievable atmosphere for the 45-year-old who was moved to tears during his walk-on to the tune of Flower Of Scotland leading into Rocking All Over The World.

The local thrower from Huntley opened with a decent 180 in the first leg and although it couldn’t stop him from falling 3-0 behind soon after, it still brought the house down. Following a disastrous week which saw him suffer two defeats in as many days, Mighty Mike moved 5-2 clear before faltering enough to allow his opponent to take back-to-back legs and move to within one. Banking himself at least a point, MVG edged into a 6-4 lead before Henderson, boosted by the support of the crowd, reeled off two 14-darters in a row to seal a shock draw.

A review of other Darts Premier League Night 5 action

In the first match of the evening, Rob Cross eased to a 7-3 victory over Michael Smith in a repeat of the UK Open semi-final less than a week earlier. Smith made the stronger start of the two, going up 2-1 only for Voltage to level things prior to hitting a brilliant 164 checkout to break Bully Boy’s throw. From there, Cross reeled off three legs in a row to guarantee himself at least a point with room to spare. Smith replied by finding the bull for a fine checkout from 90, before Voltage closed out the match.

The 10th Premier League Darts whitewash in history was recorded in match two when James Wade thrashed Daryl Gurney 7-0. Fresh from inflicting Mighty Michael van Gerwen’s first defeat of the Premier League season a week ago in Exeter, The Machine produced another dominant performance in which he averaged 109.59 while also hitting two ton-plus checkouts. Wade finished with seven doubles from nine, winning six of his seven legs in 15 darts or less. Superchin, who averaged 95.45, was battered 7-1 by Rob Cross in Night 5 and this latest heavy defeat now leaves his leg difference in tatters.

In match three, Gerwyn Price once again had to play through the boos as he produced another good performance in which he brushed aside Mensur Suljovic. Price earned his pantomime villain tag after his antics against Gary Anderson in the Grand Slam of Darts back in November, and clearly the Aberdeen crowd were not in a forgiving mood. Despite the crowd behind against him, The Iceman coolly carried on as he has all Premier League season to maintain his unbeaten start to the campaign. The Welshman landed a 107 in the opening leg while he hit a 12-darter in the fifth to race into a 4-1 lead. Price then took the sixth before The Gentle responded with an 11 darter to close the gap, albeit only slightly. The pair then shared the following two legs to allow Price to scoop up all the points for that match. Former rugby player Price finished with an average of 93.26 compared to Suljovic’s 95.67.

The last match of the evening produced a win for Peter Wright, who produced arguably his finest performance of the season so far where he beat Raymond van Barneveld 7-3. The win sees Snakebite move up to fifth in the table but does little for Barney’s hopes of going out with a bang. The Dutchman now sits bottom and this latest defeat sees him being cut off from the rest of the chasers. Barney did take the opening leg only for Wright to take the next five in a row. RVB then finished from 81 for an 11-darter only to see Snakebite land his third and final 180 of the night as part of an 10-darter. There was still time for Barney, who averaged 95.36, to pull one back but it was to make no difference as Snakebite, who averaged 106.64, finished the contest soon after.

We open with a tough one this week in Nottingham, as UK Open winner Nathan Aspinall takes part as the latest contender. We have seen some great performances from local heroes – all playing in place of the injured Gary Anderson – not least, Chris Dobey in Night 1 and John ‘Highlander’ Henderson’s draw with MVG last week. This week, however, could represent the best chance yet to back a contender for the win. One of the fastest rising stars of the PDC, The Asp certainly has the potential to heap more misery on Smith, who is currently struggling badly. Last year’s runner-up is second to the bottom with one win in five and needs desperately to turn things around soon. Arguably, his best chance to do that is against a contender — it’s just a shame that it happens to be this one. Aspinall win.

Out of nowhere, James Wade appears to be playing his best darts ever. Having dispatched world number one Michael van Gerwen seven days earlier, The Machine last week dumped Daryl Gurney in a whitewash performance that took him top on leg difference. With Suljovic struggling for form, Wade should come through this test relatively untroubled. Another player showing the form of old is Rob Cross, who suddenly looks like the player he was at the end of 2018 when he was crowned world champion. Voltage has won two on the spin with victories over Daryl Gurney and Michael Smith, and with bottom-placed Barney looking all kinds of wrong, it is hard to see Cross not taking all the points here.

Match four pits Michael van Gerwen against Gerwyn Price in a battle of the heavyweights. The unbeaten Iceman will fancy his chances against an MVG who is looking increasingly out of sorts. A defeat to James Wade was followed by another the following night, to Mervyn King at the UK Open. Last week he dropped even more points, this time against local hero John Henderson. Even so, it is never advisable to bet against the Dutch world champion, even less so given that Mighty Mike has won all 13 meetings against the Welshman.

Finally, this week we have selected Peter Wright to beat Daryl Gurney. Wright put in his best performance of the season so far in Aberdeen winning easily against Barney while Superchin has lost 13 legs and won just one in the last two weeks of Premier League Darts action. Also, Gurney has not beaten Wright in their last four matches so we’ll stick with a Snakebite win.

This week’s accumulator with Betway looks like this; Aspinall, Wade, Cross, MVG and Wright which pays 23.25/1. 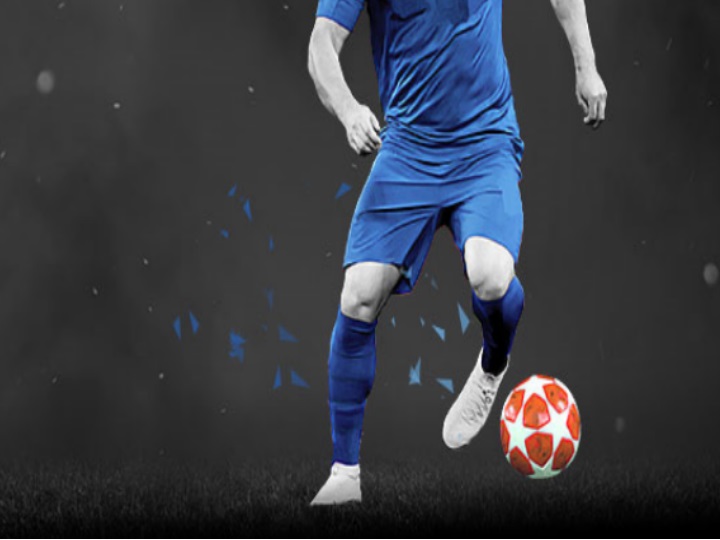 Fancy yourself as a Soccer expert? Enjoy the Champions League action in two great matches by predicting the correct result and getting up to 30 Free Spins.

Stake £10 cash or more on any Casino at bet365 slot game and make your prediction during the relevant qualifying periods. 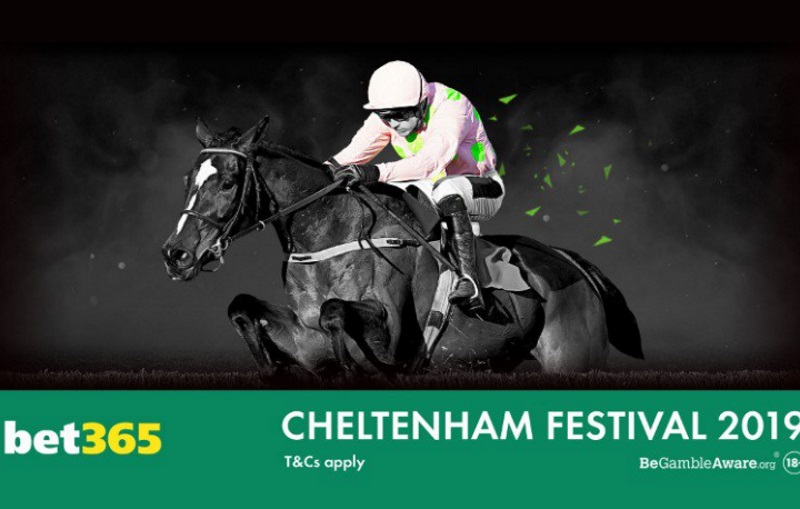 The 2019 Cheltenham Festival begins on Tuesday 12th March and Bet365 are now Non-Runner No Bet and Best Odds Guaranteed on every race from the highlight of the National Hunt racing calendar.

With Best Odds Guaranteed you can take the price on your selection and if the SP is bigger at the time of the race you will be paid out at the bigger odds.

This offer includes Board Prices, bet365 Early Prices, singles and multiples as well as Showcast bets on all racing where a fixed price is offered. Offer applies to bets placed on Win and Each Way Fixed Odds markets and Enhanced Place Terms markets only. All other markets, including adjusted place terms (Each Way Extra), Ante-Post bets (unless otherwise stated) and Tote/Pari-Mutuel (bets and dividends), are excluded from this offer. All Australasian Racing is excluded. Best Odds Guaranteed is only available to new and eligible customers.

Bolger: Tiger Roll is the one to beat

‎
Enda Bolger is happy with the form of Josies Orders and Auvergnat heading into next week’s Cheltenham Festival. Bolger is chasing his sixth win in the Cross Country but concedes that beating Tiger Roll will be a big ask. Tiger Roll landed the race for Gordon Elliott 12 months ago before going on to win the Aintree Grand National. Bolger admitted: “The Cross Country race looks very good this year and Tiger Roll is the horse we’re all going to have to respect. “Josies Orders has been better this year than he has in previous seasons while Auvergnat is there as well. He has to come into the reckoning after his Leopardstown run.” Josies Orders is 7/1 with bet365 to win the Cross Country while Auvergnat is 11/2.