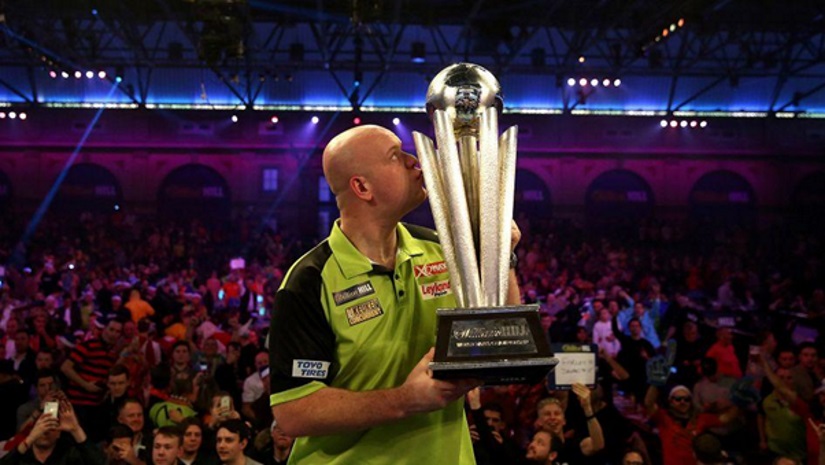 Despite winning 18 individual titles in 2018, there were a few doubts lingering around the Dutchman’s form heading into this year’s tournament at the Alexandra Palace, but having successfully navigated his way past his first four opponents, he simply blew away world number two Gary Anderson 6-1 in the semi-final to banish any remaining negativity.

The path to the final

On his way to the final, Bully Boy produced a brilliant set of performances not least in his close fought semi-final win over Nathan Aspinall. In the Quarter Final stage, he dismissed Luke Humphries 5-1, which followed his 4-1 defeat of Ryan Searle in the fourth round, John Henderson 4-2 in round three and a 3-1 victory over Ron Meulenkamp in his opening match.

MVG’s route was harder than he made it look, comfortably seeing off Ryan Joyce 5-1 in the QF’s, making light work of twice world champion Adrian ‘Jackpot’ Lewis in a 4-1 win in the fourth. This was a repeat of the scoreline that eliminated Max Hopp in the third round, which followed his opening day 3-1 win over Alan Tabern.

The world number one, who only dropped five sets on his way to the final, carried his form into the final where he stormed into a 4-0 set lead over Smith. The match was a repeat of MVG’s victorious 2018 Premier League final and produced the same outcome. Van Gerwen looked to have blown the fourth set with three missed doubles but instead survived after Smith spurned four of his own to find himself 4-0 down. Bully Boy did fight back to half the deficit before missing more than enough crucial chances to make the game more competitive.

Banking a 124 checkout in the deciding leg of the fifth set, Smith took out 124 and 127 at the start of the next set before finishing a 70 to claim the sixth leg and raise the crowd’s hopes of a comeback. Instead, Mighty Mike won three of the next four to complete an emphatic triumph and get his hands on the Sid Waddell Trophy for a third time.

At 29, MVG has now won 117 titles and becomes only the second player after Phil Taylor to be PDC world champion more than twice.

On February 7 in Newcastle’s Metro Radio Arena, ten of the world’s best darts players will once again begin another Premier League campaign. This year, the event stretches out over 17 weeks, and as always, will conclude at London’s O2 arena in May. As well as the thrilling conclusion to the Darts World Championship, Sunday also saw the confirmed line-up for this year’s tournament, which means we can also look to the Ante Post betting prices.

2009 champion James Wade returns to the 10-man field after missing the 2018 tourney. It will be interesting to see who get more boos on the road between himself and fellow Premier League competitor Gerwyn Price. Raymond van Barneveld is back for a final season ahead of his retirement, while Players Championship Finals winner Daryl Gurney and German Darts Masters winner Mensur Suljovic both compete for a second year in a row, having made their Premier League debuts in 2018.