Anderson became the third name to secure a spot in next week’s Darts Premier League finals at The O2 in London, with Phil “The Power” Taylor likely to secure the fourth spot after shocking his long-time rival last week.

Anderson ran out the 7-3 winner in his match with James Wade last week, hitting an average of 94.32. It was well below his best but still seemingly enough to end Wade’s campaign.

Mighty Mike suffered a rare defeat at the hands of his great rival and the previous world number one Phil Taylor. Rewinding the clock back, “The Power” treated the Sheffield crowd to an average higher than 100 as he made Mighty Mike rue a wealth of missed doubles.

Chisnall looked down and out a month ago but a fine run of form has remarkably pushed him into contention, even if it seems that things have been left a little too late.

His hand was further strengthened by a brilliant 7-5 win against Raymond van Barneveld, who is now officially out of the running and joins the rest of the eliminated. Chizzy landed a 109.36 average, by far the highest of the night’s performers and certainly more than Barney’s respectable 100.65.

Adrian ‘Jackpot’ Lewis was another also-ran; his remote chances were ended easily by Peter Wright in a 7-2 win that puts the Scotsman within one point of MVG at the summit. He’s well in with a shout of winning the £25,000 league leaders’ bonus.

The big interest for this week’s final round before the playoffs lies in the qualification battle between Phil Taylor and Dave Chisnall.

The latter of the two competing for London spot is the first out in Aberdeen this week in a match against James Wade for whom the game is nothing but a dead rubber. With that in mind, it would be wise to bet on Chizzy.

That match precedes Taylor’s all-Stoke battle with Adrian Lewis where again only one has it all to play for. Again, it’s worth backing Taylor who, in his retirement year, holds a place at the O2 Arena in his hands – although both Lewis and Wade can upset the odds here. A double on both at Bet365 is worth 11.6 to the pound.

Peter Wright can take the top spot with a win against Barney in the following match but qualification is already ensured. Assuming this is an exhibition match, try these treble specials, both from SkyBet:

Wright to win the match, hit the outright highest checkout and score more 180s at 7/2, or Barney to do the same at 11/1.

Finally, the top two players in the world go head-to-head – but both are already looking ahead to next week, with MVG’s motivation stemming from his desire to win and take down the £25,000 league leaders’ bonus.

Given the quality on show in the night’s closer, it would come as no surprise if this was the match that saw the most 180s. Bet365 certainly think so and are laying 4/5 for that to happen.

Following the money in a week of damp squibs, one line on Chizzy, Taylor, Wright and MVG pays out at 9.11 with Betway.

Chizzy incidentally is a 200/1 shot to be the outright tournament winner, also with Betway.

Michael van Gerwen and Peter Wright both booked their places in the finals of the Darts Premier League with wins in Birmingham last Thursday. 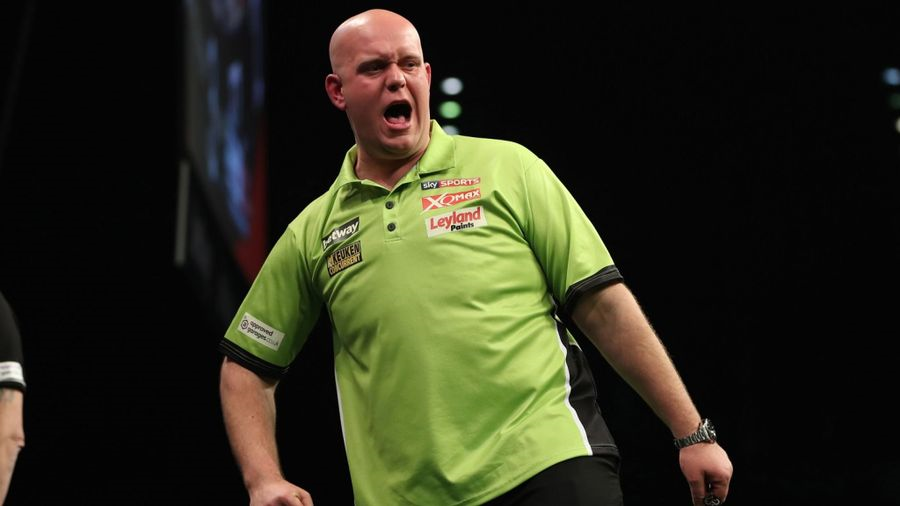 The world number one brutally dismissed Adrian Lewis with a 110.75 average, hit without a reply in a classy whitewash – the first in the League this year. This was Mighty Mike’s second match of the evening, having earlier tied with Dave Chisnall in a match where he found himself trailing 6-3.

This was the third 7-0 win in MVG’s Premier League career and sent him three points clear at the top of the table – ahead of Peter “Snakebite” Wright, himself guaranteed a place at the London finale on May 18.

Lewis’s London participation now hangs in the balance having played two, lost two last week when his MVG embarrassment was preceded by a 7-4 defeat to James Wade.

This was a match in which Jackpot failed to land 12 of his 16 double shots and has now lost three on the bounce following his nine-darter in Liverpool.

Snakebite’s qualification came courtesy of a 7-3 win against Phil “The Power” Taylor, a six-time League winner who now stands fourth in the table. He clings onto hope of a playoff appearance in the face of this week’s upcoming clash with Mighty Mike.

That defeat means Taylor switches League positions with Gary Anderson, who moves up to third following his 7-4 victory over Raymond van Barneveld. The world number two averaged 105.47 and closed with a 161 checkout.

Just the four matches this week!

The first of these matches pairs Peter Wright and Adrian Lewis in a fight for survival for the latter. Lewis has been on terrible run of form since hitting a nine-dart finish a fortnight ago. The smart money must surely go on Peter Wright here.

Fifth-placed Barney still has hopes of making it to the O2 (likely in place of Taylor) but needs to overcome an improving Dave Chisnall to do so which is far from guaranteed. Given the defeat he suffered last week in Birmingham, a win for the Dutchman looks sound enough.

James “The Machine” Wade steps out with Gary “The Flying Scotsman” Anderson in the night’s fourth game. Third-place Anderson will be looking to cement his playoff position with a win, a result he is likely to get. SkyBet are offering a great treble on Anderson to win the match, hit the outright highest checkout and score more 180s than Wade which, at 13/8, looks a steal.

Phil Taylor has the unenviable task of getting a result against Michael van Gerwen, fresh off the back of dishing out a whitewash to Adrian Lewis.

In the likelihood of an MVG win, the final place – assuming Anderson wraps up third place this week – should boil down to Taylor who meets Lewis and RVB who meets Wright next week.

The best price on Anderson to win the League championship is a very decent 11/2 across the board with Bet365, Betway and SkyBet. Taylor, on the other hand, can be picked up at 20/1 in the same rooms.

The week’s four-fold accumulator is Wright, RVB, Anderson and MVG which pays out 8.12 but might be worth insuring slightly with a Lucky 15.