Peter Wright bounced back into form last weekend to claim his ninth PDC title of 2017 at the expense of Mervyn King in the European Darts Open final in Leverkusen, Germany. 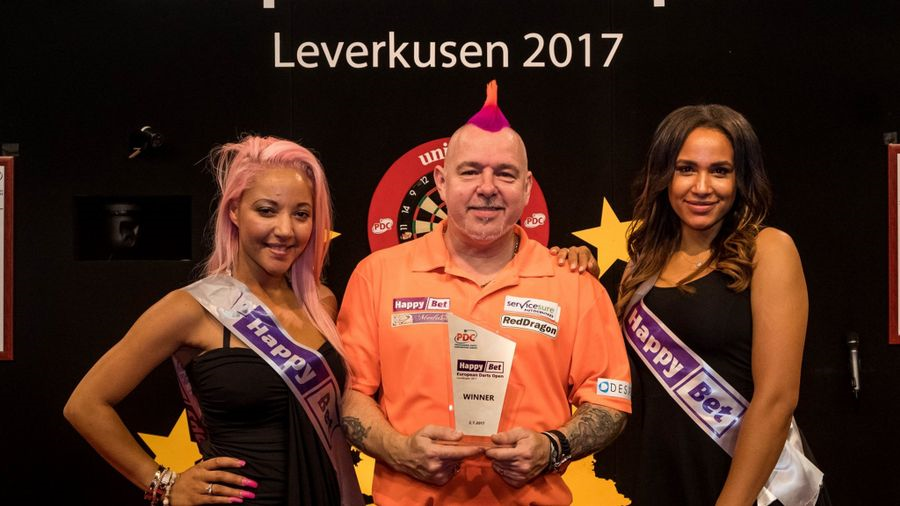 King, the first unseeded player to reach a European Tour final for almost 18 months, didn’t have long to enjoy his moment of glory as the flamboyant Scotsman secured a 6-2 victory over his English counterpart.

Miraculously, the win means Snakebite edges ahead of Michael van Gerwen in terms of the amount of individual events won this season.

That being said, MVG’s winning streak stretches back into last year’s televised glamour events and he also tasted victory alongside Raymond van Barneveld to win the World Cup of Darts trophy for his country.

This time though the Dutchman exited in Sunday’s afternoon session following defat to Rob Cross, also from England, in a superb match which saw both players average over 102.

The Wright path to victory

For reigning UK Open champion Wright, the path to Sunday’s final saw him meet Robbie Green who he brushed aside 6-1; Stephen Bunting who was seen off 6-3; then  Dave ‘Chizzy’ Chisnall who was crushed 6-1 in the quarter-finals.

Finally, he came up against Mensur Suljovic who was soundly beaten 6-3, allowing Wright to sail into the final where Mervyn King was waiting courtesy of his own 6-4 semi-final victory over the emerging Michael Smith.

Wright vs King: as it happened

It was a final where Wright averaged over 103 and vastly improved his doubles ratio, landing six of his nine attempts.

Snakebite took out 136 to break his rival in the first leg with a 12-darter before repeating the feat in the third with a 13-darter to send himself 2-1 up.

King managed to pull one back with a 13-darter but Wright took three legs straight before finishing the match off in style with a 101 checkout to clinch his fourth European Tour crown of the campaign and the top prize of £25,000.

This week picks up the PDC World Series of Darts in its Shanghai Masters leg, taking a momentary break from the European Tour.

Things get underway this Thursday at the unsociable time of 06:00 for UK viewers, who can watch proceedings live or through extensive highlights on ITV 4.

Anyone looking to drop money on Michael van Gerwen can do so at a best price of 4/6 as agreed upon by both SkyBet and Bet365.

The two sportsbooks do differ on second favourite however, Bet365 favouring Peter Wright (4/1) over his Scotland team mate Gary Anderson (5/1), one half point better in value than you’ll find “The Flying Scotsman” at SkyBet, where the opposite applies for Snakebite fans.

Mighty Mike versus the field

At Betway, they have taken the sensible step of backing Michael van Gerwen against the rest of the field, which is basically removing the Dutchman from the betting.

The field can be picked for 11/10, which given the quality of those attending, is definitely worth a look. Remember, the world numbers two, three, five, six, eight and nine all go here. This Betway special does not affect Mike’s price of 8/11.

The trip to China also brings Phil Taylor back to the oche, much to the delight of the darts masses. “The Power” is available at 14/1 with Betway, where Barney fans will also be intrigued by the 25/1 offered on their man.

Elsewhere, Dave Chisnall can be backed at 25/1, way shorter than James Wade who finds himself 40/1 in the betting with Welshman Gerwyn Price bringing up the rest of the unfancied field, also at 40/1.