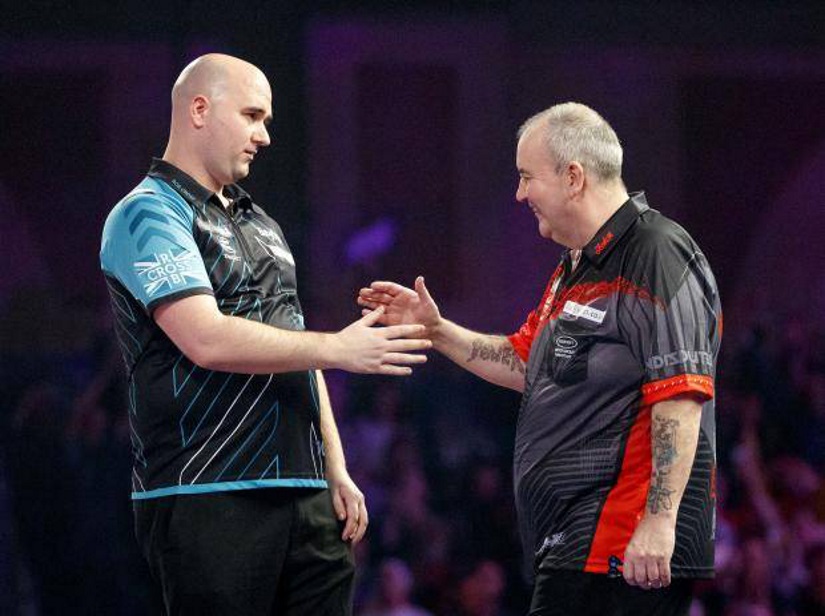 In the end, the fairy-tale finish was not to be as Phil ‘The Power’ Taylor, 16-times World Champion, was denied a 17th win in his last ever match. It was remarkable that he made the final at all, but at one point it appeared written in the stars as top seeds were eliminated, opening up the tournament for the retiring legend.

But as so often happens in sport, as one star makes way another emerges, and so it was that Rob Cross, 27, who 18 months ago was an amateur player and a working electrician, finished his first ever professional season as the new Darts Champion of the world.

Ranked 28/1 before the start of the tournament, a brilliant Cross — who averaged 107 and landed 20 out of 34 checkout attempts in the final — was too much for Taylor who managed just 10 from 22 in a match that ended in a 7-2 defeat at Alexandra Palace.

Taylor, heavily backed by the crowd, averaged a decent 102 and won 10 legs, scoring 12 180s — one more than Cross — but still had no answer to the rookie.

Landing a 167, Cross immediately went up 2-0 and was soon three sets ahead and never looked like squandering the lead from there. Taylor took down the fourth set but the gap between the two Englishmen was restored when Cross capitalised on his rival’s failure to land his doubles in the following leg.

One set away from defeat, Taylor landed the eighth before Hastings-based Cross, finished in fantastic style with a 140 finish, made up with two treble 18s and a double 16, to win the what will surely be the first of many more major tournaments to come. In total, Cross hit 66 180s in the tournament, 16 more than anyone else.

Just 18 months ago, Cross was working as an electrician playing darts only occasionally and whose winnings last year included £7 in a pub game. Cross even gave the game up for three years to look after his family. Then, he took his shot.

After failing to qualify for the 2016 BDO World Championships, he tried his luck at the UK Open, a tourney open to qualifying amateurs. Following defeat at Riley’s Bar in South Benfleet, Essex, Cross was on the verge of quitting before being persuaded by his uncle to take part in the very last qualifier in Norwich, a move which was to prove “sort of life changing,” as Cross described it on Sunday.

He duly won in Norwich and went on to make the final 32, eventually being eliminated by world number one Michael van Gerwen in a close fought 9-5 defeat. From there, his new-found confidence inspired him to go on the PDC Unicorn Challenge Tour where he finished top of the order of merit, giving him an automatic two-year tour card.

Then on the 3rd of February this year, Cross played his first ever match as a professional, earning £250 at a UK Open qualifier in Wigan. In the year that followed, he was to continually make the latter stages of tournaments and beat MVG multiple times including 6-2 in the quarter-final of the European Darts Open and 6-5 in an epic match at this year’s World Championships as he eventually replaced the near-invincible Dutchman as World Champion.

Next up the number three raked Cross will be playing in the Darts Premier League, the next big event from the PDC and due to start next month. Dublin’s 3Arena will open the 2018 season on Thursday, February 1 on Sky Sports Action with the season wrapping up at the Play-Offs at London’s O2 on May 17.

There can be few sportsmen who have dominated and influenced their game quite like Phil “The Power” Taylor. Hailing from Stoke-on-Trent, Taylor was one of the original 16 players that broke away from the BDO to form the World Darts Council in 1992. This committee would soon evolve into the PDC which held its own world championships two years later in 1994, changing darts forever.

The Power won the first of his world titles in 1990 — the same year its latest champion Rob Cross was born — and went on to win a further 15 and almost claimed his 17th last Sunday as he fell just one match short of the ultimate send off. In July, however, he summoned up his brilliant best as he took down a record 16th World Matchplay title, which was to prove his final ever major televised title win in an incredible career.

With the PDC players now taking a well-earned rest, it is timely that the BDO Championships begin this Saturday. The 2018 BDO World Darts Championships will take place from January 6-14 at the Lakeside Country Club where Glen ‘Duzza’ Durrant will begin his title defence against either Gary Robson and Pengiran Mohamed in the first round.

Durrant is the 5/4 favourite with Betway to become the first back-to-back winner at Lakeside since Martin Adams in 2011. His 7-3 win in last year’s final came at the expense of Danny Noppert who the same online bookmakers are rating as a 15/2 shot.

Mark McGeeney and Scott Mitchell hold the BDO world number one and two spots respectively, so they will be the ones looking to stop Durrant’s dominance in the event. That said, a victory for ‘Duzza’ in the final would ensure he ends the season in the BDO’s number one position.

Durrant would meet Mitchell in the semi-final, should they both progress as expected, while he could well face off with McGeeney in the final.

Mitchell is 12/1 to win what would be his second world title, with McGeeney currently priced at 20/1.

Elsewhere, Jamie Hughes is also considered to be a 12/1 shot, with Cameron Menzies rated at 16/1. Further down the money line, Scott Waites is valued by Betway at 22/1 with the old master Martin Adams worth 40/1.

Events will be broadcast in Channel 4 and BT Sport.