Barney Bows Out In Rotterdam 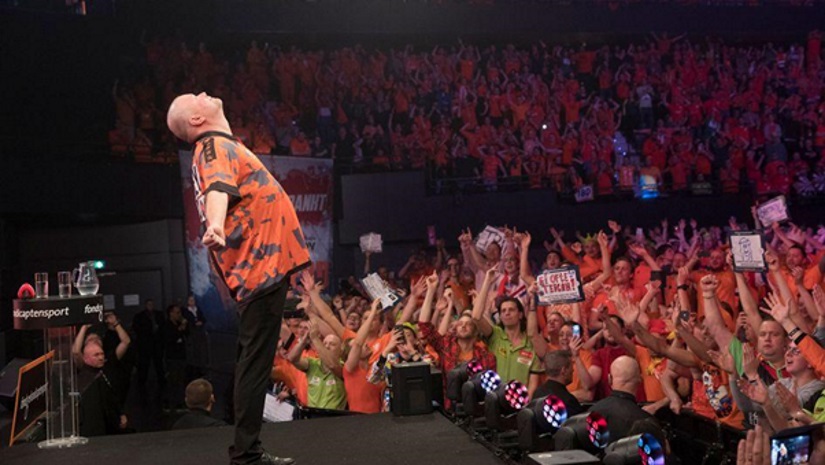 In a reception normally reserved for the likes of departing rock stars rather than Darts players, Raymond van Barneveld was treated to a hero’s send-off in Rotterdam last Thursday. Barney’s final Premier League Darts season, from which he had been relegated one night earlier, ended with a heavy 7-1 defeat to fellow Dutchman and former protégé Michael van Gerwen in Rotterdam.

We knew going into the match that this would be his farewell performance in the tournament, an event he won in 2014, as he was due to retire at the World Championships in London in December. Such a heavy defeat, however, coupled with such a glorious show of love from the 10,000-strong Barney Army, led an emotional Barney to announce his immediate retirement on home soil after the match. However, 24-hours later, after reflecting on his decision, Barney has decided that the lure of the Ally Pally was too strong and that he has decided to reverse his decision and fight on after all. Happy times for his devoted fans.

Barney’s relegation from his last ever Premier League campaign was assured on Wednesday after he was thrashed in another 7-1 defeat, this time by Daryl Gurney. In his match against van Gerwen, he found himself in very real danger of a whitewash after MVG stormed into a 4-0 lead, which would have been an even sorrier end for the people’s champion. But, much to the relief of his legion of followers, he finally got a leg on the board when Mighty Mike missed tops in the next. That was Barney’s only strike of the night as MVG threw for the match shortly after.

Other action from Night 9 of the Darts Premier League

Daryl Gurney’s hot streak continued in the night’s opener as he beat Mensur Suljovic 7-3 to record his third Premier League victory in a row. Only a few weeks ago, Superchin was languishing down near the bottom of the table but now finds himself on a four-game unbeaten run that includes last Thursday’s shock win over Michael van Gerwen. The Northern Irishman’s latest win, in which he averaged 98.28 compared to Suljovic’s 91.58, means he now has 11 points heading into Belfast on Thursday night. Gurney’s victory never really looked in doubt, despite having his early 2-0 lead pegged back by The Gentle, who soon found himself down 5-2 before long. Just as he had one night earlier, Suljovic hit a 12-darter that suggested he could mount a fightback similar to the one that beat Rob Cross on Wednesday but he instead went on to miss eight shots on double allowing Superchin to take all the points.

The Price was Wright for Gerwyn in match three where The Iceman shot down Snakebite 7-5. Peter Wright is fast becoming the player to end other players’ bad runs of form. Gerwyn Price used the occasion to end a run of three straight Premier League defeats and hopefully breathe new life into his flagging play-off challenge. Price will now be looking to Daryl Gurney, who is on a horrible stretch of his own in which he lost 7-0 and 7-1. He then played Wright, drew, and has since reeled off four straight wins to find himself fourth in the table. Here, the Welshman averaged 94.47 compared to Snakebite’s lowly 87.6 as he cruised into an early 2-0 lead. Wright, though, closed the gap and before long had moved ahead 5-4. The Iceman was level again by the sixth before returning in the next to bank at least a point for himself. Wright then missed the two darts that would have let him get away with a draw — much needed after his 7-1 mauling the night before — before Price pinned tops to take the spoils.

Having stumbled a night earlier against Mensur Suljovic, Rob Cross dug deep to get his title campaign back on track against the final of our contenders, Jeffrey de Zwaan. The young Dutchman, who received overwhelming support from the 10,000-strong Rotterdam crowd, began his night’s work with an 84 checkout as part of a fearless 12-darter, before finishing from 151 to stun Voltage into an early fright. After Cross pulled a leg back, JDZ immediately replied with yet another 12-darter, which this time included a deuce of 180s to restore his two-leg cushion. At 3-1 down, 2018 World Champion Voltage began to fight back by winning five legs on the spin to silence the vociferous Dutch support. De Zwaan, nicknamed The Black Cobra, managed to pull one back, but like each of the other contenders, was unable to win as Cross got the job done in the next, courtesy of his eighth 180 of the match.

In the final match of the night, James Wade came back from 3-1 down to defeat Michael Smith 7-4 and move up into third place in the table. 2018 runner-up Smith almost opened with a nine-dart finish but missed the final shot only to claim the first leg on his return. The Machine responded with a 12 darter of his own before Bully Boy took the next two legs in just 27 darts. Wade took over by reeling off three straight legs of his own. Although Smith briefly equalised, The Machine ran away with the match thereafter.

The race for a Premier League play-off place continues in Belfast on Thursday, and having said goodbye to Raymond van Barneveld and the last contender, we’re down to the final eight. The first of our four matches sees James Wade take on Mensur Suljovic with The Machine only too aware that he does not have a good record against Suljovic. In fact, Wade has only won five of their previous 15 meetings and has already he was beaten in this campaign by The Gentle 7-3 in Nottingham during Night 6. Wade is playing with confidence right now and beat Michael Smith a week ago so will fancy his chances of breaking his duck against the Austrian this week. Suljovic will be looking to bounce back from his defeat last time out in Rotterdam. He was at least able to record a win in the first of last week’s two games when he came from behind to beat Rob Cross. I suspect he will come good again this week as well.

Michael Smith is out next in his match against Peter Wright. With the league shrinking by two places, Smith — runner up last year — narrowly avoided relegation last week but still finds himself occupying the bottom space and will hope that a match against Snakebite can halt that slide. Victories against Wright have worked wonders for both Daryl Gurney and Gerwyn Price and could prove to be the catalyst for Bully Boy too. Wright is second bottom himself having not won in four outings, and he has not beaten Smith in his last three Premier League games. I don’t see that changing here.

Next up are Daryl Gurney and Rob Cross. While Gurney is on a hot streak, having seen off competition from van Gerwen, van Barneveld and Suljovic over the past three Premier League nights, Rob Cross is one of the few players capable of challenging MVG for top spot. One dodgy result aside, he is playing like best in the world right now. It’s true that the Northern Irishman will be hard to stop in front of his home crowd, but I think Voltage should have too much in this particular meeting.

Finally, we would expect Michael van Gerwen to beat Gerwyn Price in the last of the night’s action. Mighty Mike was all action back home in Holland last week, winning both of his matches 7-1, and regaining top spot in the process. Price, on the other hand, ended a slump of three straight defeats by beating Snakebite but has lost each of his 15 matches against the Dutchman and that might well be a slump too far.

A four fold accumulator with the online bookmaker Betway placed on Mensur Suljovic, Michael Smith, Rob Cross and Michael van Gerwen all to win pays out at 16/1.