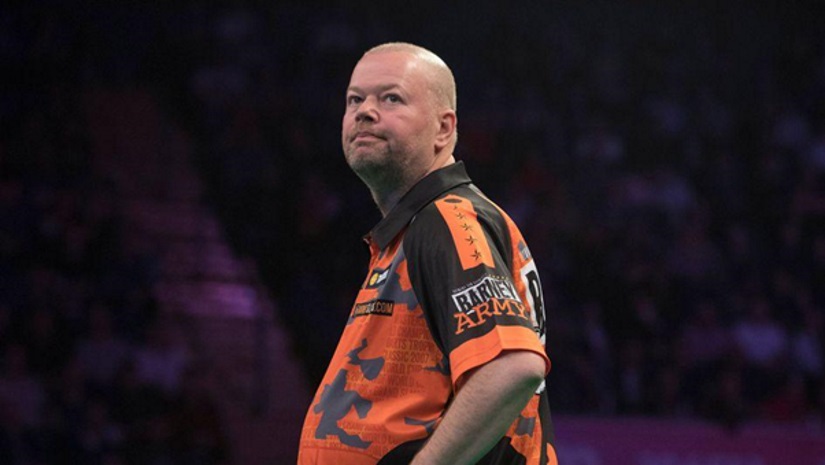 The curtain came down on Raymond van Barneveld’s distinguished Darts Premier League career last night in Rotterdam after the five-time world champion lost 7-1 to Daryl Gurney. The 2014 DPL champion, who retires at the Ally Pally at the end of the year, needed at least a draw to keep his survival hopes alive following Gerwyn Price’s defeat to Michael Smith in the opening match of the night.

Despite being given a hero’s welcome from the home crowd, Barney couldn’t channel it to his advantage as he averaged a disappointing 81.96, hitting just one 180 and successfully landing only one of his six shots at double. It was a sad ending to a brilliant career. The result flatters Gurney who himself only managed a single 180 while missing nine of his 16 darts at doubles. All of which means that Barney will now bow out on Thursday’s Judgement Night against fellow Dutchman Michael van Gerwen, ironically the player he beat to lift the trophy back in 2014.

The Barney Army out in full force! pic.twitter.com/U4CP35SCoP

Barney faced a Mighty Mike that is back at the top of the table after he very nearly whitewashed Peter Wright but instead had to settle for a 7-1 win. MVG had dropped to fourth in the table after two defeats and a draw in his last three games, but he was back to his brilliant best against a very poor Snakebite. Back on home turf, van Gerwen produced a ruthless display to run away with a 6-0 lead as Wright’s head was wobbling. Just when MVG looked like banking his second whitewash of the season –- and 11th in Premier League Darts history –- Wright pulled back a consolation leg only to see van Gerwen successfully throw for the match one leg later. MVG averaged 101.29 compared to Wright’s 88.12 by the end of the contest.

Perhaps the night’s most surprising scoreline came in the battle between Rob Cross and Mensur Suljovic, where the Austrian came from 4-0 and 5-1 down to claim an unlikely 7-5 victory, knocking Cross off the top of the table. An in-form Voltage looked like he too was heading towards his own whitewash when checkouts of 74 and 89 took him into a 4-0 lead as Suljovic floundered. The Gentle finally got his name on the board in the next, only for Voltage to land a 13 darter and extend his advantage to 5-1. Then everything changed as Cross performed his best Peter Wright impression and spurned four darts at doubles over the next four legs allowing Suljovic to level the scores. Cross then wasted the chance to make a point safe when he blew another seven darts at doubles before being punished by a superb checkout from 136 from Suljovic, who followed that up with a finish from 120 to claim an unlikely –- and thrilling –- win.

In the night’s opener, Michael Smith saw off the challenge from Gerwyn Price to book a crucial 7-5 victory. Last year’s runner-up took advantage of some sloppy finishing from The Iceman, who missed five darts at a double in the opening two legs to allow Bully Boy to move into a 2-0 lead. The Welsh former Rugby player fought back in the next two legs to level things up before Smith won three of the next five legs in 15 darts or fewer. Price hit two superb checkouts from 116 and a match-high 141 to stay in the game before Smith moved further ahead by taking the game to 6-4, guaranteeing himself a point in the process. Price forced a deciding leg when he took the following leg, but Bully Boy held his nerve and landed the bullseye with the last dart in his hand to complete a 90 checkout.

The first of this week’s contenders, Dimitri van den Bergh, almost became the first Belgian ‘local’ hero to come away with a win after he took James Wade all the way to a tie. The two-time World Youth champion got off to a fast start when moving into a 2-0 lead before both players left the stage for around five minutes after James Wade made complaints of a draught coming through. Unfortunately for van den Bergh, the temporary pause, greeted by boos after Wade insisted on the walkout, nipped his momentum in the bud. Wade came back out on a mission and immediately landed a 14-darter followed by a 106 checkout to bring the match to 2-2. Van den Bergh then responded with his first 180 of the match as part of a 12-dart leg, a feat he repeated one leg later. The Machine drew back level again before DVDB again pulled clear. Before long he had booked himself a point with a leg to spare. Unfortunately for The DreamMaker, he missed his shot at double seven when attempting to take out 78 for the match, allowing Wade to step up to the oche and take out double 10 to tie the game.

Following Barney’s elimination last night, Judgement Night isn’t really Judgement Night anymore but there is still plenty to look forward to in the second part of this week’s Rotterdam double-header. That said, the rest of the table is extremely tight with only four points separating Michael van Gerwen at the top and Michael Smith in eighth so the fight for playoff places is as healthy as ever.

The first match of the night pits Daryl Gurney against Mensur Suljovic with both players having won 24 hours earlier. Gurney claimed his victory against Barney to remain unbeaten in three games, while third-place Mensur produced a match-winning fightback against Rob Cross to win his third match in a row. Superchin averaged in the high 80s, a rather low score considering the size of the scoreline, but plays tonight with the freedom of knowing that the threat of relegation has passed so should be feeling less pressure. This is a match that could go all the way with a draw. I’d expect Gurney to start climbing up the table now and will back him to take maximum points from his two night trip to Rotterdam before he returns to the Belfast leg next week.

Match two sees Gerwyn Price take on Peter Wright with the Welshman on a run of three straight defeats. However, Wright is also out of form and has himself gone three matches without a win and was only one dart away from suffering a whitewash last night against MVG. Despite this, Wright has been the better of the two over recent weeks as The Iceman’s performance levels have dipped following an excellent start to the campaign. While I wouldn’t rule out Price’s chances of getting back on track tonight, I’m going to go for Snakebite for the win and hope that the better version of himself shows up. The Welshman has an awful head-to-head record of just two wins from 15 matches against the Scotsman which is good enough for me.

Last night also saw the end of Rob Cross’ four-game winning run as he dropped off the top of the table. The former world champion will be keen to bounce back against this week’s contender Jeffrey de Zwaan, who he has beaten on the two previous occasions they have met. So far, none of the previous eight replacements for Gary Anderson have managed to win, although Dimitri van den Bergh came close last night. de Zwaan is the last chance they have to bank a win — I can’t see it though.

It’s an all-Dutch affair in Rotterdam for match four where the Darts Premier League officially says goodbye to Raymond van Barneveld. Barney has been involved in every Premier League since his debut in 2006 and last won it against MVG back in 2014. Tonight, he goes up against Michael van Gerwen who is unlikely to show any sentiment to his countryman in his farewell. Barney beat van Gerwen here last year but Mighty Mike is back in the groove after walloping Wright last night to go back to the top of the table and will only cement his position there further tonight.

In the night’s final game, Michael Smith takes on James Wade. Smith, who was last year’s runner up, is another who plays tonight knowing his continuing participation is safe. Wade, roundly booed last night after he further boosted his pantomime villain reputation following the walkout he arranged, twice came back from a two-leg deficit to draw with Dimitri van den Bergh. Another draw tonight wouldn’t surprise.