Premier League Of Darts Night Of Deadlock In Birmingham 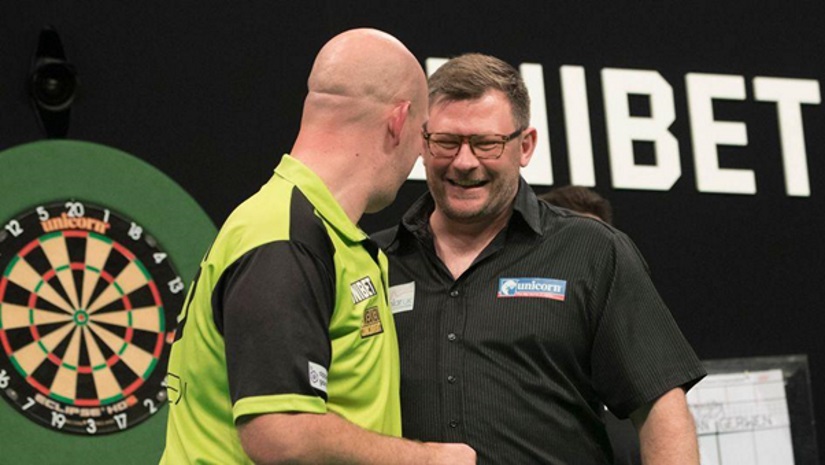 On a night of ties in Birmingham, there was only one winner – Daryl Gurney – and one loser – Peter Wright – as three of the four matches ended in a 7-7 draw.

For Gurney, the 8-4 result did wonders for his chances of reaching the Premier League playoffs, as he moves to within a point of the top four. For Snakebite, it means he now props up the others as he sinks to the bottom where he displaces Michael ‘Bully Boy’ Smith. Superchin averaged just below 100 while hitting four 180s and seeing success with 8 of his 14 attempts at doubles. He also hit three ton-plus checkouts, one of which helped him establish a 6-4 lead not long before he banked 81 to finish off a match-winning 12-darter. Overall, Wright managed an average of 96.04, hitting just the one lonely maximum and recording a 50% checkout rate making his chances of making it to London fade out of sight.

At the other end of the table, birthday boy Michael van Gerwen couldn’t get past James Wade, who put in another superb effort against the World number one, beating MVG for the second time this Premier League season. It was an entertaining match that was going with throw until The Machine moved into a 7-5 lead. But on his 30th birthday, MVG — who lost 7-3 when they last met in Exeter back in February — soon reeled off back-to-back legs in 12 and 13 darts to tie the match and maintain his one-point lead at the top of the table. By the end of the thrilling contest showdown, in which all legs were won in 15 or fewer, the world champion had averaged 106.78 over Wade’s 103.66.

The point between Mighty Mike and Rob Cross stayed intact, Voltage was unable to secure a win against Gerwyn Price earlier in the night. In fact, Price, who averaged 101.18, was unlucky not to win as he had Cross on the hook only to fail to convert any of his four-match darts to let his opponent back into the game and save the match. Having initially fallen 3-1 behind, The Iceman then turned the game on its head to lead 6-4 and then 7-5, from where he let the game slip away. Cross, who averaged 97.81, struck back with a late rally to claim a point and keep him in second place.

The night’s other draw saw Mensur Suljovic fight back from 6-2 down to draw 7-7 with Michael Smith. The whole Premier League season has played out this way for Bully Boy, who has performed far better than his position suggests. He did move up a place off the bottom as Peter Wright sits underneath, but far too many times this season he has thrown away a commanding lead.

Up 6-2 up, Smith was required to win the last leg to save a point. Suljovic began his comeback with a superb checkout of 120 to reduce the gap to 6-3 before reeling in Bully Boy with a string of legs that included a finish from 84 for a 12-darter. From 6-6, the Austrian sealed a 116 checkout to move ahead for the first time in the match before Bully Boy landed a double eight with his last dart in hand to square the score.

This week the action moves to Manchester with James Wade and Gerwyn Price the first pair to step up to the oche. Third-placed Wade has his sights firmly set on London after producing another brilliant display against Michael van Gerwen and almost completed a competition double over the Dutchman. In the end, The Machine was forced to settle for a draw, but given the quality of the opposition, I doubt he will be too troubled in his match against Price. The Iceman, though, is another who is at the top of his game right now and is currently occupying the final playoff place. This is a match that really could go either way but given Wade has won six of their 10 matches, I’m plumping on The Machine to be victorious in Manchester, even if a draw wouldn’t surprise.

Michael van Gerwen will play Daryl Gurney in the following matchup and its hard to see the league leader coming away with anything other than the maximum points. Last week, Mighty Mike was forced to dig deep against James Wade while Gurney was the only player to win in Birmingham. The pair have met 23 times in the past, with MVG coming out on top in 18 of them. Bear in mind that it was actually Superchin who won their last two, although I doubt very much he will win this one .

Match three pairs Mensur Suljovic and bottom-placed Peter Wright, where the smart money should go on the Austrian. Although Suljovic failed to win last week against Michael Smith, he is chasing a playoff spot and is currently in fifth place. In contrast, Snakebite was last week’s only loser and looks to be in a very dark place at the moment, while his chances of making it to the O2 are shot. Wright hasn’t won now for almost two months — eight matches to be exact — while The Gentle has won seven of their last eight meetings and should continue his winning streak this Thursday.

Finally, I would expect Rob Cross to beat Michael Smith in the last game of the night. Cross remains hot on the heels of Michael van Gerwen after saving a point last week against Gerwyn Price. Smith has suffered a disappointing campaign and is way off the pace in a competition he came second in last year. On that note and with more to play for, Voltage — who has won 11 of their 14 matches — has the beating of Bully Boy and should take maximum points again this time too.

Your Betway acca for the week is, then, as follows; James Wade, Michael van Gerwen, Mensur Suljovic and Rob Cross, which pays 11.18/1.