Before we recap last week’s Premier League action, lets rejoice in Peter Wright breaking his duck and finally claiming his maiden televised PDC event. That’s right, Snakebite took down the UK Open at the Butlins Minehead Resort last Sunday and with it lifted an enormous monkey from his back. 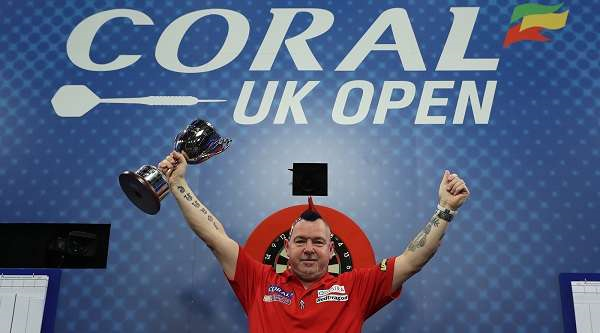 On the night, he defeated Gerwyn Price 11-6 to avenge the previous two years where he has twice come runner-up to Michael van Gerwen. This time there were no such problems for the world number three as he produced a display and a tournament win that we all knew was coming and, if anything, was long overdue.

The popular 46-year-old produced a tournament average of 101 and a final average of 100 as he won the final three legs to seal victory, finishing the match on the bull in an 85 checkout.

Speaking after the match, an emotional Scotsman said simply: “It feels great to win my first one. The fans have given me fantastic support, not just this year but also for the last two years.”

Wright’s victory here followed a win on Thursday night in the fifth week of the Darts Premier League, another tournament where Snakebite is flying high. Wright beat Adrian Lewis 7-2 in the penultimate battle of the night. In truth it was a one sided affair as Lewis, who has been out of form for too long now, couldn’t keep up with Wright who, in contrast, is in the form of his life.

The night began with an upset, however, as Dave Chisnall won 7 legs to Raymond van Barneveld’s 2, meaning my acca was blown apart inside the first half hour. I’m sure I wasn’t alone. This was followed by an unsurprising 6-6 tie between Jelle Klaasen and Kim Huybrechts before an equally predictable 6-6 was played out by the world number two, Gary Anderson, and retiring legend, Phil Taylor.

In the final match of the night, Chizzy was wheeled out once more to replace an injured Michael van Gerwen who dropped out in the hope his back injury would improve. Chizzy, suddenly alive with form, beat James Wade 5-7 and leaves the Dutchman needing to play two games in week eight in order to catch up.

Play now moves on to The SSE Hydro in Glasgow where another action-packed Thursday night awaits. The Stoke pair of Jackpot Lewis and Phil ‘The Power’ Taylor open up the action at around about 19:00 with the points looking likely to head to the 16-time world champion.

This match is followed by James Wade coming up against Peter Wright where I will stick to Wright stretching his run further still. That said, this is the toughest to call this week with the very capable Wade always a threat.

Huybrechts and MVG are up next and, providing the World Champion’s back holds up, this should be a coast for Mighty Mike. Slightly tougher to call is the Klaasen versus Barney match that follows; it depends on which Raymond van Barneveld turns up on the night. Should the real Barney stand up, it’s a no-brainer win for elder stateman of Dutch darts.

Finally, Chizzy meets Gary Anderson who will fancy his chances – which is why I’m tempted to pick the line of Taylor, Wright, MVG, RVB and Anderson. However, not being brave enough to put on a single acca, I will opt this week for a Canadian instead at just over 11/1 for the five-fold with Betway.

I will also be backing James Wade to make the highest checkout, with odds worth 6/5 available at SkyBet. Plus, given the form he has started to show at long, long last, I’m going to lay some money on an outright win on Snakebite himself. The best I have found for this is by far and away at Bet365 where he is almost twice as good as value as anywhere else.