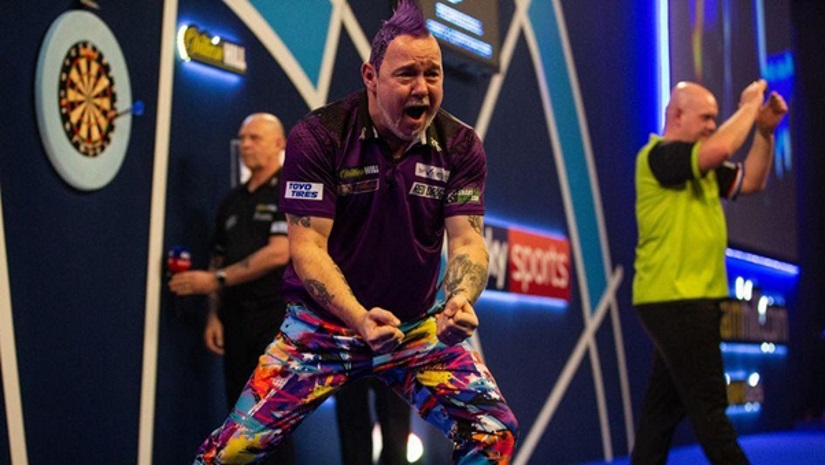 After quite a poor season overall, Peter Wright claimed darts’ biggest prize on New Year’s Day 2020 when he was crowned world champion at London’s Alexandra Palace. The 2018 UK Open winner, whose sole other major PDC honour is the Darts World Cup, won jointly with Gary Anderson, beat Michael van Gerwen, in a repeat of the 2014 final in which he lost.

This time he banked a 3-7 win to become only the ninth ever winner of the Sid Waddell trophy. Snakebite, who turns 50 in March, played the match of his life to claim his first PDC World Darts title and become the oldest first-time world champion in PDC history.

Two nights earlier, after he came through an angry affair with Gerwyn Price, he promised lessons had been learned from prior defeats and that things would be different this time around, not least because he had finally settled on a set of darts that he felt comfortable with in his hand. And, although 2019 had offered no such signs of a mentally tougher approach, he came good on his promise on the highest stage his profession has to offer to delight the raucous Ally Pally crowd.

In finally winning here, Wright has at last broken free of one of the longest-running ‘choker’ tags in sport. Of his 13 previous major televised finals, Wright had lost 12, seven of which came against Michael van Gerwen. Indeed, in the build-up, van Gerwen, who once labeled Wright a clown, accused him of blowing up whenever they met. This time around, however, there was added backbone to the guy with the spiky hair and silly trousers, a look that has, at times, made him a target for abuse and mockery.

Playing his fifth final in eight years, four-time champion MVG had an off night, indeed an off tourney in which he was haphazardly shooting – and missing – double after double. Rarely was Mighty Mike been at his best in this tournament and the number of crucial missed doubles, including set darts at 4-3 and 5-3 down in the final, ended up costing him dear. This sloppiness allowed Snakey to open up a two-set lead early on. Sets three and four went the way of the Dutchman however, allowing him to draw level before Snakebite struck once again. 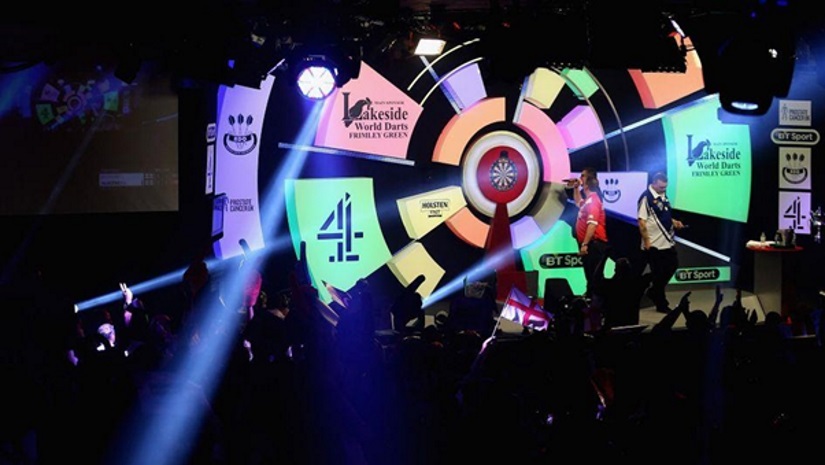 At the point where punters were expecting Wright’s head to wobble having let slip a two-set lead, it was the Dutchman that conspired to miss seven consecutive darts at a double, and Wright pounced with a 96 to edge ahead once more. This was followed by four consecutive breaks, with which Wright regained his two-set lead at 4-2.

At this point, it was van Gerwen’s head on the wobble as he went to walk off the stage when he was 6-3 down, wrongly thinking there was a break. After composing himself, MVG took the seventh and looked likely to take the eight but once against missed tops instead with his final dart letting Wright back in for the steal, before Snakebite reeled off the next set too.

In the final set, Snakey had three championship darts to finish with a double 10, and after missing the first two, he finally nailed it with his third shot to seal a big win. For a guy who spent the best part of a decade in his 20s and 30s unemployed and barely playing serious darts at all, it was all too much and the tears began to flow just as the pyrotechnics and the crowd exploded.

Over the past two and a half weeks, Wright has come through a ferociously tough draw which peaked with wins over the top two players in the world, MVG in the final and before that in a bad-tempered semi against Gerwyn Price. The two known friends riled and goaded each other in a series of mind games that resulted in The Iceman losing his cool and Wright displaying a new and tougher mental edge that would drive him on to become world champion.

Leaving Lakeside for the first time since 1985, the 2020 BDO World Darts Championship will this year take place at the O2 Arena complex in London, home to the PDC’s Darts Premier League Play-Offs, albeit in the Indigo nightclub, from January 4th-12th.

While admittedly still living in the shadow of the PDC event which finished on Wednesday and saw Peter Wright crowned world champion for the 1st time, this is still prime winter viewing and helps to get over our post-Dartsmas blues, not to mention offering some great betting opportunities too.

The BDO event has been running since 1978 making it one of the oldest darts tournaments in the world, but this year faces a threat to its future after losing the support of the sport’s governing body, the World Darts Federation, who have said that they will no longer recognise BDO operated tournaments.

The damming decision followed October’s calamitous BDO World Masters at the Circus Tavern, when officials were forced into a redraw after a problem with international player registrations and the advertised format being all wrong. Ticket sales are also well down on expectations which has resulted in a sharp drop to prize money. Ironically, the organisers only took the decision to move to the O2 from Lakeside to improve attendance.

This will also be the first year that the tournament will not be shown live on terrestrial TV. For 40 years, the BBC stuck loyally by the event, peaking with an audience of 4,000,000 in 1999, but following budget cuts and a declining TV audience, ended their association in 2016. Channel 4 and BT Sport originally picked up the coverage but both stations have also since ended their association with the competition. This year, the tournament will be aired across Quest and Eurosport, after Eurosport signed a three-year, nine competition deal with the BDO last year.

That said, with a month off from PDC action, darts fans will still be tucking into the action to get their tungsten fix. Despite its issues, this year promises to provide another exciting championship, perhaps made all the more exciting thanks to three-time men’s winner Glen Durrant, switching to the PDC tour which should open up the field considerably.

In total there are 32 players taking part, made up of 24 ranked players plus eight qualifiers. As for the tourney, round one starts as a best of 5, before becoming best of 7 in the second, best of 9 in the quarter-finals, best of 11 in the semi-finals and best of 13 in the final.

Sizing up the 2020 BDO Championship field

BDO number one Wesley Harms is also the event’s number one seed and will face either Andreas Harrysson or World Masters champion John O’Shea in the first round. Harms, a 10/1 shot, will need to contend with the likes of Scott Waites, Scott Mitchell (12/1) and former PDC world championship finalist Andy ‘The Viking’ Hamilton (28/1) if we are to see a Dutchman win a world championship this January after all.

Number two seed and BDO World Trophy winner Jim Williams enters as the 7/2 favourite to win his first world title. He takes on Gary Stone (66/1) in his opener, while Richard Veenstra has been installed as the second favourite at 8/1.

Other eye-catching games in the opening round include three-time world champion and 40/1 outsider Martin ‘Wolfie’ Adams, returning to the BDO and immediately clashing with two-time champion Scott Waites, who once again reached this final last year. Betway have placed a 10/1 price on Waites, a player you can never rule out.

Another long shot is 31-year-old German Michael Unterbuchner, who has a 18/1 price on his head. Look out too for Scott Mitchell facing Leighton Bennett, some 14 years old. Betway recognise his potential and rank him at 14/1 which, given his talent, might be worth a punt, even if world domination might be some years off just yet.

Back in June, the schoolboy, nicknamed ‘Boom Boom’, made a name for himself, when at the SAP Darts Slam in Frankfurt, he amazingly stunned 16-time world darts champion and all-round darts legend Phil Taylor by beating the retired great 4-1. Former World Masters champion Adam Smith-Neale (40/1), Dave Parletti (20/1) and Martijn Kleermaker (25/1) are all also in the field, priced here by Betway.

In the ladies event, Ally Pally heroine Fallon Sherrock will not be back in action at the BDO Women’s World Championship, for which she had been the fourth seed. Citing “unexpected changes to the event,” the 25-year-old’s withdrawal comes after the BDO confirmed that prize money for the event was to be cut following poor ticket sales.

Sherrock had been the odds-on favourite following her run at the Ally Pally and was set to take on close friend, 14/1 shot, Corrine Hammond. The next player on the BDO ranking table, former World Championships semi-finalist and 2017 World Cup Singles Champion, Vicky Pruim from Sweden, will take Sherrock’s place and Betway have quickly installed her as a 50/1 chance.

The number two ladies seed is defending champion Mikuru Suzuki, who was also present at the PDC equivalent. Defending champion Suzuki, 9/4, will meet 50/1 outsider Maria O’Brien in the first round, while the ladies’ 2/1 favourite Lisa Ashton will face off against Paula Jacklin (100/1) and Anastasia Dobromyslova (8/1) plays 66/1 shot Sharon Prins. Elsewhere, the 15-year-old debutant Beau Greaves is available at 9/2 and takes her bow against Trina Gulliver. 2019 runner-up Lorraine Winstanley (16/1) and England Captain Deta Hedman (20/1) Aileen de Graaf (14/1) will all also be in the running.