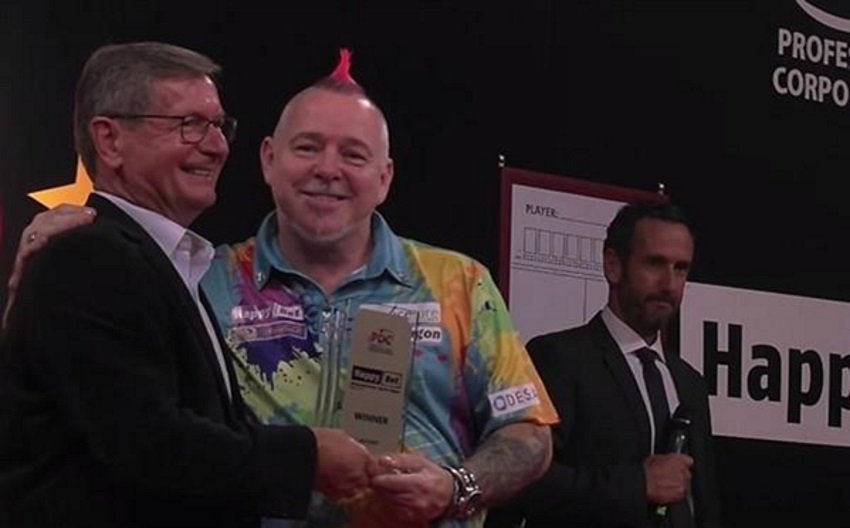 Last week, we called Kim Huybrechts as a worthy each-way bet and identified Peter Wright as the major talent. For those paying attention, well done. While Peter ‘Snakebite’ Wright was our 3/1 winning darts betting tip last week, at ¼ of the 25/1 odds, Huybrechts’ losing appearance in the final was still worth £6.25 to the pound.

The win in Riesa, Germany means that Wright becomes only the fourth man to win 10 PDC titles in a calendar year, as he beat Huybrechts 6-5 to clinch the International Darts Open. For Huybrechts, this is his second losing final appearance in this tourney since losing to Mensur Suljovic at the same stage last year.

The victory at the SACHSENarena represents Wright’s fifth European Tour title of the year and tenth overall. Earlier this year, Wright landed the UK Open title in March, the Players Championship 11 as well as three UK Open qualifiers. It was a welcome return to form for Wright after a disappointing Champions League showing one week earlier when he failed to escape the group stage. This week, as the highest ranked name in attendance, he posted a 102.65 average in the final after fighting back to win from behind in the previous round.

Huybrechts, looking for his first European Tour title since 2015, had beaten Ian White, Gerwyn Price and Joe Cullen on his way to the final where he quickly established an early lead, twice breaking his man to move 3-1 ahead. The advantage swung back and forth between the two over the next few legs, before Wright settled things at 4-4. In the following, deciding leg, Wright produced a 116-checkout making a 12-dart leg that allowed him to win another title plus pocket £25,000 in the process.

Kim became the second Huybrechts of the weekend to fall victim to world number three Wright, who also beat Kim’s brother Ronny Huybrechts 6-4 in the third round. Wright then saw off Dutchmen Jelle Klaasen and Ron Meulenkamp in an impressive run to the final.

This week, players move on to the Citywest Hotel in Dublin for the week-long Darts World Grand Prix. Getting underway at 19:00 on Sunday the 1st of October, Michael van Gerwen is favored to win the event as reflected at both Betway and Bet365. Both bookmakers have placed an 4/5 price on the World number one’s head.

A double-start format means all legs have to begin and end with a double so Peter Wright’s notorious double hitting ability might well cost him dear. Of course, much the same can be said for Gary ‘The Flying Scotsman’ Anderson. As good as both players unquestionably are, this short format tourney can disrupt those who let things get to their head, which is a risk to Anderson and Wright. Normally during a match, darters will get numerous attempts to fix their game; however, the Grand Prix will not afford that luxury, and with no Phil ‘The Power’ Taylor or even Raymond van Barneveld present, the wise money should go on MVG even at an odds-on price.

For the record, Anderson finds himself at 5/1 while Wright is 7/1, so if you’re feeling like an outside gamble these two are your best shot. From there, the prices drift well out with Mensur Suljovic a best price of 22/1 at Betway, before the 28/1 offered on Daryl Gurney. Of the bigger longshots, perhaps the most intriguing is the 33/1 listed on two-time World Champion Adrian ‘Jackpot’ Lewis but this is an event that Mighty Mike van Gerwen really should be taking down without too much bother.

Starting with 32-players, the first round runs across two nights, before the second round on Tuesday and Wednesday, followed by the quarter-finals on Thursday and semi-finals on Friday. All the action will be broadcast live on Sky Sports.