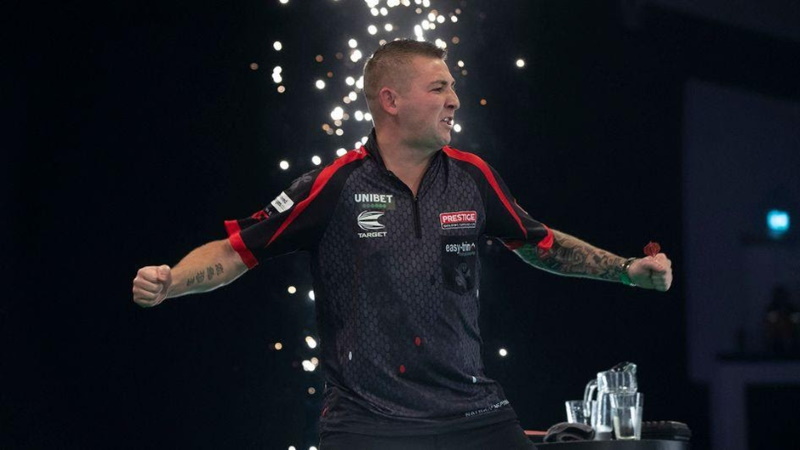 The only remaining 100% record in this season’s Darts Premier League went on last Thursday night in Cardiff as Michael van Gerwen suffered a shock defeat to Nathan Aspinall. It was only The Asp’s third match since he joined the full-time Darts Premier League line up, demonstrating why he is seen to be one of the fastest rising stars in darts. Averaging 101, the UK Open champion, who was ranked as far back as 73 in December 2018, hit a superb 110 checkout to go 2-1 up before holding his throw with a 15-darter to give himself a two-leg cushion.

The Stockport chucker then came close to taking a 4-1 lead but missed bull at the crucial moment to let MVG back into the contest. Holding his own in the follow-up, he kept the two-leg lead intact before van Gerwen looked like he would get back into the match once again. With the score at 4-3, MVG landed six perfect darts on his way to leveling the tie. The following two legs went with throw to take the match to the final two legs, where MVG uncharacteristically missed two darts at tops to let Aspinall have a go at successfully finding the same target which he managed with ease to record a famous 7-5 victory.

With the win, the two time World Championship semi-finalist went level on four points with Mighty Mike, who beat him in the last four at the Ally Pally only two months ago. The Asp is now 11/1 with Betway to win the Darts Premier League outright

It was Peter Wright and Rob Cross who got proceedings underway in the Welsh capital in a match where Snakebite picked up his first victory of the Darts Premier League season. The 2020 world champion was taken all the way by the 2018 world champion who was bidding to maintain his unbeaten start to the season. Wright opened up with a pair of 13-darters in the opening three legs as Voltage had no reply to the onslaught.

Cross then successfully took out the following two legs on the trot to reduce the deficit before Wright broke back with a cool 10-darter. The three-leg cushion was restored soon after before the next two legs went with throw. Wright guaranteed himself a point not long after before Cross finally woke up to threaten to salvage an unlikely point. Threaten was all he could manage, however, as Snakebite reacted perfectly to take out the final leg and with it the points.

Challenger Jonny Clayton was on the receiving end of a 7-1 thumping to Michael Smith in the night’s third match. Bully Boy hadn’t tasted victory in this competition for 10 matches, a winless run that dates back to March of last year. His drought was well and truly ended emphatically here, but it didn’t look like that was going to be the case at first as Smith initially fell a leg behind after Clayton threw a 13-darter in the first to the delight of the Welsh crowd.

That was as good as it got for The Ferret as Bully Boy immediately took over and began putting on a scintillating performance. The 2018 runner-up seized upon three doubles in the third leg to move 2-1. He followed this up with back-to-back 12-darters that included a 167 checkout. A 13-darter was to follow soon after, which allowed Smith to sail into a 5-1 lead, before surviving a momentary threat in the seventh and closing out the game in the eighth.

Draw specialist Gerwyn Price stepped out in front of his home crowd in match 4 but didn’t have enough to claim his first Premier League victory of the season as he once again drew, this time with Daryl Gurney. The back-to-back Grand Slam of Darts champion was out of sorts on the night and required a 13-darter in the final leg to save his skin and secure a third successive point.

It was a tight match all round, although of the two opponents, it was The Iceman who had initially made the breakthrough when he broke Superchin’s throw in the ninth to take a 5-4 lead. Gurney responded with a pair of 13-darters leaving Price staring down on defeat once again, only to save a point once again.

Glen Durrant, one of just two unbeaten players this Premier League season — along with Gerwyn Price — is the new leader of the pack as he shot down Gary Anderson in a brilliant 7-4 dismissal to take the top spot in this year’s Premier League table. Duzza now has two wins to his name and a points tally of five, one ahead of Michael van Gerwen and Nathan Aspinall.

The three-time BDO world champion breezed into a 5-1 lead before The Flying Scotsman took three legs from the next four to threaten to put a spanner in the works, but it was a spanner that never materialised, as Duzza took the points and with them the top spot.

What looks like the biggest match of the week is also the first match of Dublin’s night 4 as debutants Gary Anderson and Nathan Aspinall duel up to further demonstrate that they’re not just here to make up the numbers. Top of the table Duzza remains unbeaten while Aspinall won last week against MVG so this match looks like being an unlikely battle of the big boys. Durrant has the joint lowest number of 180s in the league so far this season . However other than that, the stats suggest that there’s not much to choose between them. With Duzza scoring fractionally higher, his momentum should see him through another week at least.

Rob Cross and Gary Anderson step out next and with one win, one defeat and one draw each, the pair have identical records so far. Also, both players are coming off the back of defeats last time out. An argument could be made that Voltage has had the tougher fixtures if we are looking to split the pair. In Anderson’s case, he did play well in defeat to Durrant but Cross was flattered in his 7-5 defeat to Wright. With the table still in its infancy, it can look a little misleading. For example, Anderson may well be the second bottom but he is also only two points off top spot.

There will be plenty tempted to back The Flying Scotsman to pick up those two points here, especially taking into account that the Scotsman can boast a formidable record over Cross, winning eight of their nine previous meetings. That said, Voltage has demonstrated a stubbornness that has served him well, almost nicking a point from Peter Wright a week ago, while beating Nathan Aspinall prior to that, so this will be no walkover for Anderson. So much so, that I’m backing shared points in this tie.

Daryl Gurney finally got off the mark last week, albeit with a point against Gerwyn Price but now faces off against a Michael Smith who recorded a 7-1 win over the challenger Jonny Clayton. Smith then, looks the player most in form. So far this season, Bully Boy has reached the final of the Darts Masters where he really should have won. In his three DPL matches, he has won, lost and drawn. In contrast, Daryl Gurney has been very out of sorts and posting plenty of poor results, save for last week. While Superchin can take heart from his Cardiff duel with The Iceman, it doesn’t feel enough to back him here against a currently superior Smith.

This week’s contender, William O’Connor has the daunting task of meeting a wounded Michael van Gerwen in match four. In general, over the past two seasons, the challengers have struggled to register an impact, save for Fallon Sherrock on Night 2. it’s very hard to make a case for O’Connor, who we last saw miscounting at the Ally Pally in December. One of the frightening things for O’Connor, known as The Magpie, is that Mighty Mike seems to be finally getting the feel for his new darts and is showing signs that an explosive hot streak might be on the horizon. In 10 matches over the weekend, he averaged over 100 in eight, including a Players Championship Pro Tour final on Sunday, where he was shot down by Gerwyn Price. If MVG takes out last week’s frustrations on the Irishman, this could be brutal.

Two of the game’s current big three go head-to-head in the night’s final game. Alongside Durrant, Gerwyn Price is the only undefeated player left in the Premier League, having recorded three consecutive draws so far. That said, he would take a draw – you would think – against world champion and good friend Peter Wright in a repeat of their moody World Championships semi-final.

Over the weekend the pair duked it out in an incredible, and it needs to be said good-natured, Players Championship Pro Tour final in which both stars averaged 109 before Snakebite took the spoils courtesy of a 170 checkout. Price responded by defeating Michael van Gerwen in another epic final on Sunday. Over the course of Saturday afternoon, Snakebite averaged 100+ in six of his seven games and is unquestionably the player in the better form, but this has all the makings of another draw for The Iceman.