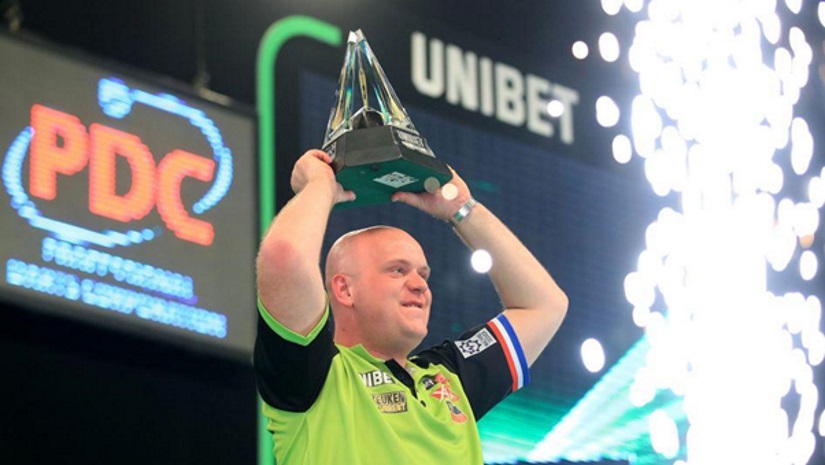 On Sunday, for the fifth time in history, Michael van Gerwen lifted the Darts Premier League trophy in London, this time by beating Rob Cross in the final, a week on from the pair finishing in first and second in the table.

To win the title, the reigning world champion first had to get past Daryl Gurney in the semi-finals and did so courtesy of a 10-7 win. In winning both games, Mighty Mike has now equaled Phil ‘The Power’ Taylor’s record of landing four successive Premier League titles.

MVG, who averaged 103.36, started the final ferociously, racing into a 5-1 lead helped by a 12-darter and a checkout from 112. Cross, who looked like both his opponent and the occasion had got in his head, took a while to get going but eventually picked things up and, for a while, looked like he might make a match of it.

Voltage duly upped his performance and rattled MVG, taking out the next three legs in 13, 12 and 14 darts and giving hope to a dramatic comeback. Just when that seemed to be the case, he wasted a gilt-edged opportunity to level the match when he unfortunately missed three darts from 36 having set himself up on his favourite double. Sadly, he blew it and you got the feeling that it was then or never.

And so it proved it to be, as van Gerwen punished him for the slip and took a slim lead into the interval after which the Dutchman found another gear. He followed a 72 checkout with an 11-darter and with it took a three-leg lead. From there, Voltage was struggling to live with the Dutchman, who had beaten him in seven of their previous eight matches. Cross did manage to claw one back with four legs to go. Of those four remaining legs, MVG polished them all off, finishing the job with a 130 checkout to complete a title-sealing 12-darter.

The runner-up, who last beat Mighty Mike in the 2018 World Championship semi-final, had got revenge on James ‘The Machine’ Wade for the previous week’s defeat that cost him top spot in the table. In their semi-final, Cross claimed a comfortable 10-5 victory over a surprisingly lacklustre Wade. In the other semi, van Gerwen banked a 10-7 win over Daryl ‘Superchin’ Gurney to book his place in a seventh Premier League final.

As we’re now reaching the halfway point of the year, with an effective week off before the Darts World Cup gets underway next week, it is a good time to check in on the latest prices for the Darts World Championships at the end of the year at the Alexandra Palace.

It will come as no surprise that Michael van Gerwen, the reigning champion, leads the betting as favourite. At least he hasn’t yet drifted odds-on, and instead online bookmakers Betway have him currently priced at 11/10 for win his 4th world title.

The disheartening thing for the rest of the field is that even off form, MVG is near unbeatable so form almost doesn’t even come into it. On that note, 2019’s forgotten man and twice world champion Gary ‘The Flying Scotsman’ Anderson might be worth a punt 7/1. Let’s also not forget about Rob Cross, who not only has won this event in the past, but is also looking every inch the world’s second best player right now. He is backed at a price of 10/1 which is extremely attractive.

Michael Smith is next in the betting and anyone fancying Bully Boy — who was runner up last year — can get a healthy 16/1. This is the same price quoted for Peter ‘Snakebite’ Wright, although he needs a much better second half of 2019 if anyone is going to take that price seriously. Speaking of price, Gerwyn Price, aka The Iceman, is 25/1 while James Wade is 28/1. Next up are Adrian ‘Jackpot’ Lewis, who has been crowned world champion twice before, is 33/1, as are both Daryl Gurney and Glen Durrant, just ahead of Mensur Suljovic’s 40/1. All prices are at Betway.