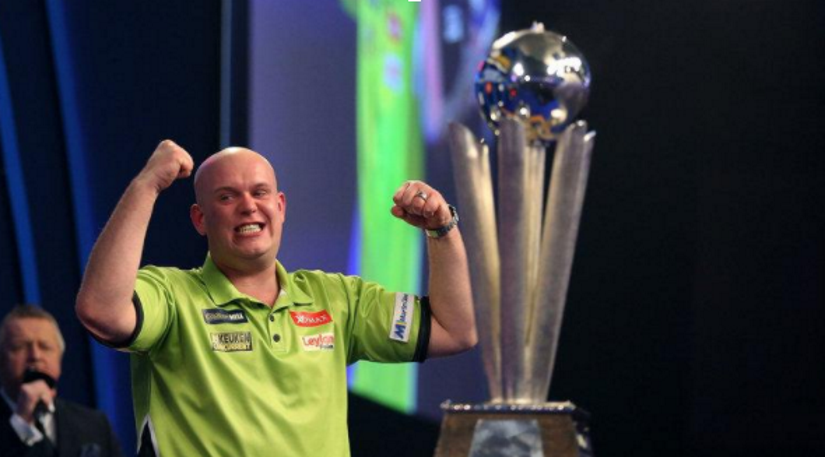 Another week means another darts tourney and yet another Michael van Gerwen victory in a televised competition. This time it was a third successive Players Championship Final victory. The world number one — it goes without saying — is now Betway’s 8/11 favourite to win the World Championship, which you will be pleased to hear is just a little over two weeks away.

Yet another victory for Gerwen

van Gerwen’s latest win came at the expense of unexpected finalist Jonny Clayton, who he beat 11-2 in Minehead. The victory comes on the back of three successive televised event wins at the European Championship, World Series of Darts Finals and the Grand Slam of Darts, stretching his run to 28 competitive match wins in a row dating back to October’s World Grand Prix.

Against Clayton, the Dutch maestro averaged 105.5 and landed five 180s and 23 doubles giving his opponent — a pre-tourney 250/1 shot who was appearing in his first ever TV final — no chance whatsoever to get into the match. Despite his loss, Clayton — who shot down Rob Cross in the semi-finals — comes away as an over-achiever that had previously never reached a quarter-final at this level.

The draw for the 2018 PDC World Darts Championship

The draw for the 2018 PDC World Darts Championship was made last night and we now know that Michael van Gerwen will begin his Championship defence against Betway’s extreme outsider Christian Kist, who is currently around 1000/1.

Two-time world champion, 2017 runner-up and 6/1 second favourite Gary Anderson will first face off against the winner of Jeff Smith (500/1) or 1000/1 hopeful Luke Humphries, but should meet MVG in the Quarter Finals if everything goes as expected.

This year’s second seed and UK Open champion Peter ‘Snakebite’ Wright will begin his campaign against Brazilian Diogo Portela (2000/1). Wright is 9/1 with Betway, who hopes to topple the Dutch master in a likely final and win what would be his biggest event of his career.

After a very slight wobble a few months back, van Gerwen has returned to red-hot form at exactly the right time making the world no 1 again the man to beat as he hunts down a third world title priced 8/11. His half of the draw will also potentially pair him with countryman and 50/1 shot Raymond van Barneveld, who starts his campaign against Richard North (750/1).

Of the 72-man field, all eyes will be on 16-time world champion Phil ‘The Power’ Taylor, who takes to the Ally Pally stage for one last time in what will be his final competitive appearance before retirement. To advance, he will likely need to come through the 500/1 priced Justin Pipe and likely one of either James Wade (125/1) or Mervyn King (300/1). Taylor is looking to repeat his superb final victory at the World Matchplay earlier this year by claiming the Sid Waddell Trophy and exiting in true Taylor style. Betway have the sixth seeded legend at 10/1 to do so. The Power will start off the eventagainst Chris Dobey (500/1).

Elsewhere, Daryl Gurney and Rob Cross continue to impose themselves on the big four. In just a year, Gurney has replaced Adrian Lewis (33/1) — who is himself a two-time winner here — as fourth seed, while Rob Cross finds himself on the edge of the top 20 despite going from amateur to professional over the same time span. Betway are offering 12/1 on Cross and 40/1 on Gurney in the outright winner’s book.

Very much the jewel in the PDC crown, the 2018 PDC World Darts Championship will takes place at Alexandra Palace in London from Thursday December 14 to Monday January 1 and will be broadcast live on Sky Sports.

First Round Draw (seeds in brackets)