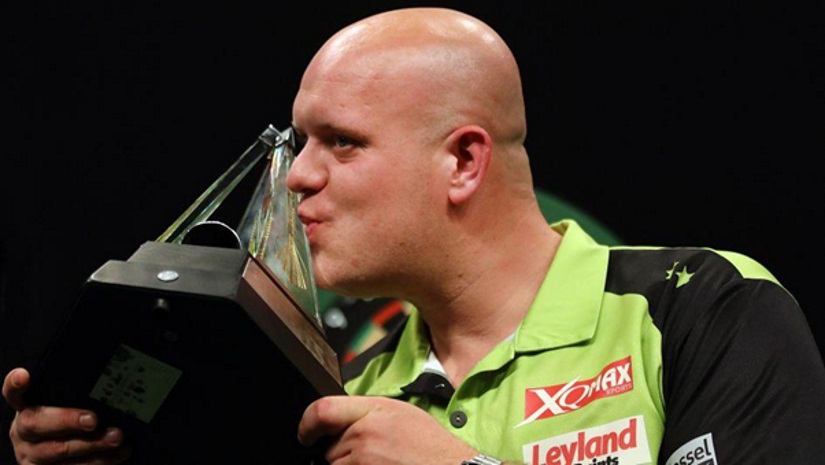 For the third year in a row Michael van Gerwen has been crowned Premier League champion after he beat Michael Smith in a magnificent show of top level darts at London’s O2. Van Gerwen has now won Premier League titles in 2016, 2017 and 2018, to go with his victory in 2013. With his latest title, MVG produced one of the all-time great performances as he thrashed Smith 11-4. This included an average of 112.37, the second highest ever in a televised final and just below his own record of 112.49 scored at the 2015 Masters.

Bully Boy appeared in his first major TV final after overcoming Gary Anderson 10-6 during the earlier semi finals, managing two ton+ checkouts and six 180s during his four leg victories, but that was as good as it got for the Englishman as Mighty Mike raced into an 8-2 lead. Before long, MVG sealed the win with a 112 checkout, bagging his 11th double in 16 attempts.

It was the Dutchman’s sixth successive Premier League final, who qualified by beating Rob Cross in a comfortable 10-6 victory earlier on in the night. Cross was hampered by a sternum injury and only averaged 96 to keep up his miserable form — save for the epic World Championship win last December — against the world number one.

Michael Smith, 27, can now feel like he too has properly hit the big time and can be very proud of his League campaign. The 2013 World Youth champion began the season as an 80/1 outsider and third favourite for relegation. Having finished in second place and beating Anderson in the semi-final, a major trophy shouldn’t be long in the coming.

The opening event of this year’s World Series of Darts gets underway this Friday. The German Darts Masters will take place in front of a record-breaking crowd of 20,000 at the VELTINS Arena in Gelsenkirchen. Fresh off from his Premier League win last week, Michael van Gerwen has been instantly installed as Betway’s outright favourite, priced at 4/6. Both Gary Anderson and Rob Cross are the nearest challengers in the betting at a much wider 5/1, while Peter Wright — who enjoyed plenty of success last season in these events — is available at 8’s. The entire field versus MVG is worth a shot, which will pay 10/11 for anyone other than the Dutch world number one to win. While we filter out the “also rans” in tomorrow’s round one, there is very little value to be found thanks to a field of mismatches and even a seven-fold on the massively odd-on favourites works out at little over 2/1. Free money for those that choose.

After the World Series of Darts, it’s the World Cup of Darts the following week. Because Scotland are favourites, and given his success in these tourneys last season, I’m personally picking Peter ‘Snakebite’ Wright to put his horrid Premier League campaign behind him and get back to his winning ways in Gelsenkirchen this weekend.