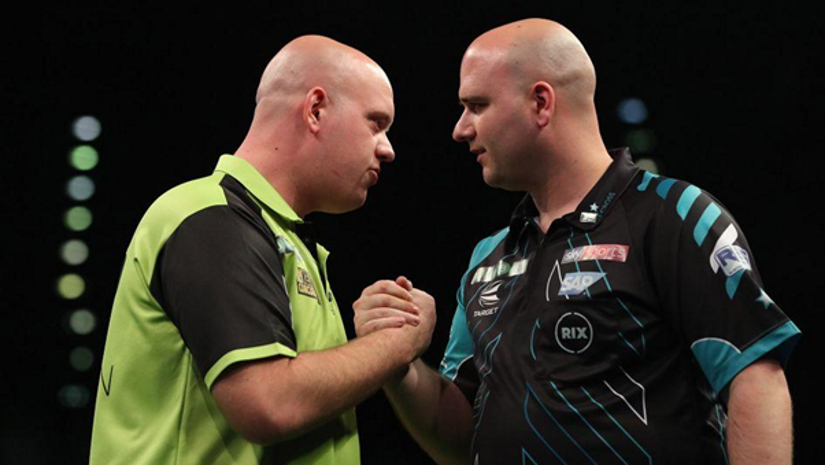 Michael van Gerwen thrashed Rob Cross 7-2 to secure top spot in the Darts Premier League for the sixth year in a row. It was a repeat of the score line from the last time the pair met back in Dublin, the second meeting since December’s World Championship semi-final at the Alexandra Palace which Cross won. It was one-way traffic with MVG almost claiming a whitewash before Cross finally got on the board late on with a 15-darter. By then it was too late as Mighty Mike was already four legs ahead, a lead he simply doesn’t squander. The 29-year-old world number one finished things off with a bullseye finish for 86 and an average of 111.57 while hitting three 180s.

At the other end of the table, Peter Wright moved off the bottom thanks to a 7-4 victory over Simon ‘The Wizard’ Whitlock. There was nothing for the pair to play for but pride as both had been eliminated from the play-offs in London later this month. No surprises that the darts were less than thrilling, with just a single 180 thrown between them. The 180 came by way of Whitlock whereas Wright’s highlight was nailing a 118 checkout. That was about as exciting as things got.

Daryl Gurney was forced to settle for a 6-6 draw against Michael Smith rather than the victory he was looking for in order to put pressure on Gary Anderson and Rob Cross in the race for semi-final positioning. Superchin played well enough in the main, scoring six 180s and average 98.82 as he fought back from 4-2 down to lead 5-4. His opponent Smith has already booked his place at the O2 and needed to hold throw in the last leg to tie the match, which he did by taking out 81 on the bull.

The result meant that Gurney required Raymond van Barneveld to beat Gary Anderson to stand any hope of making it through to London. Barney did indeed prevail 7-3 as Anderson suffered back-to-back defeats, having been shot down by Simon Whitlock last week. The Flying Scotsman only needs a couple of legs to qualify but will still be annoyed with himself for not getting things sorted sooner. Anderson is two points ahead of Daryl Gurney in fourth but will need to play better in his last match before Docklands, which just happens to be against the world number one Michael van Gerwen. Barney, who was leading 5-1, was already eliminated but will be buoyed by an improved performance in which he averaged over 100, hit three 180s and landed seven from 13 double attempts.

Welcome to Penultimate Night or Matchday 16 at the BHGE Arena in Aberdeen. Yes, we have made it to the last of the regular match night events and we now almost know the final four that will be doing battle in next weekend’s playoffs in London’s Docklands. As always, all the action will be broadcast live on Sky Sports from 7pm GMT.

This week opens with Michael Smith versus Raymond van Barneveld with one darter already through (Smith) and another (van Barneveld) already out. Smith is still yet to lose to an opponent outside of the top four this season, so he’s well worth sticking with to keep that run in motion. It’s also worth noting that he has won six of the last eight meetings between these two, which happens to include a whitewash in this year’s Premier League, which is why I’m backing Bully Boy this week. Smith to win, under 6.5 total 180s and under 1.5 100+ checkouts in the match, all for 11/2 with Betway.

Next out are Peter ‘Snakebite’ Wright and Daryl Gurney. Gurney needs to win 7-2 or better here and hope that Anderson loses to MVG by a score line large enough to overturn the leg difference deficit which currently stands at 12. Gurney has won four of his last five matches against Wright, so should be expected to uphold his end of the scenario. Considering these two have drawn more often than anyone else in the league this year, including in their league meeting, it also stands a reasonable chance of ending 6-6 — so don’t rule out a tie or, if he feels like it, a Peter Wright win. I don’t see it though; Superchin all the way for me. Gurney to win or draw, hit the most 180s and two 100+ checkouts in the match for 5/1 has to be worth it.

The night’s third match is between Michael van Gerwen and Gary Anderson. Chances are these two will meet again on May 17 in a 1st versus 3rd playoff, but for now its Anderson — on a run of back-to-back defeats — that needs to step up to guarantee his place. MVG won’t make it easy for him though. He hasn’t lost to Anderson in their seven meetings, and when Michael smells blood he usually goes in for the kill. The Flying Scotsman can draw heart from the crowd in his native Aberdeen, who will turn out to vehemently back their man even if his chances of a confidence-boosting result look slim. Get more value on Mighty Mike by picking Van Gerwen to win, average over 100 and hit a 120+ checkout worth 11/2 at Betway.

Finally, we have Rob ‘Voltage’ Cross taking on Simon ‘The Wizard’ Whitlock in a match where, like the opener, one is through and one is out. The qualified, Cross, is winless in his last four and lost 7-1 to this week’s opponent earlier on in the league season. However, that was back in week two and their fortunes have flipped entirely since then. Cross has hit more than three 180s in nine of his last 13 matches, and with a place in the play-offs already banked, he looks certain to head to the O2 on the back of a win over the eliminated Aussie. At Betway, you can back Cross to win, hit the most 180s and no 100+ checkout in the match for 100/30.

There is also this Betway boosted treble with odds powered up from 4/1 to 5/1; Smith, Cross and MVG all to win. Our line this week is Smith, Cross, Gurney and MVG, which pays 13.20 to the pound.