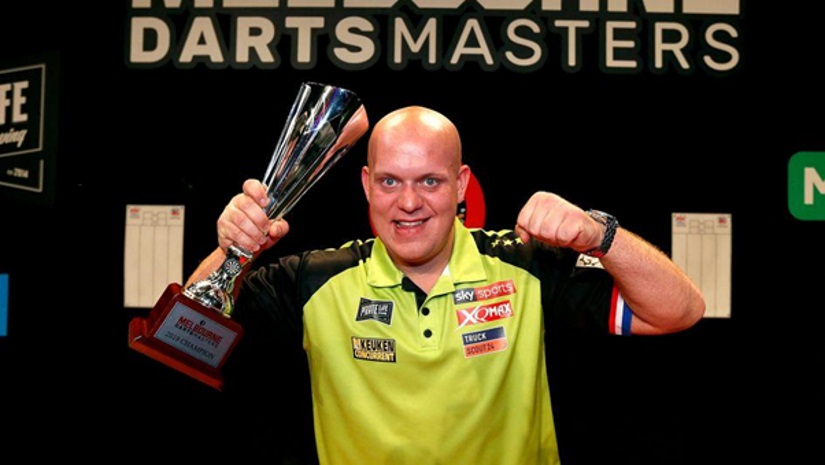 Michael Van Gerwen returned to winning ways last weekend as he beat Daryl Gurney 8-3 in the final of the Melbourne Darts Masters to claim yet another title. On route to the final, he also took care of Gary Anderson and Peter Wright as the world number one began to look something like close to his best.

He was of course, the pre-tournament favourite, but prior to Melbourne, he hadn’t looked like himself for weeks, especially in Blackpool, where he fell out early in a very disappointing World Matchplay campaign. In fact, Saturday’s win saw Mighty Mike pick up his first solo PDC title since lifting his fifth Premier League crown back in May.

MVG Melbourne campaign didn’t even get started particularly well as he dismissed Tim Pusey on Friday without posting a 100+ average, for what was to be the 14th match in a row. By Saturday, he was back to himself, averaging 100.63 and throwing seven 180s in a thrilling 8-6 quarter-final destruction of Gary Anderson.

Mighty Mike’s next victim was Peter Wright, who in contrast, was back to his sloppy worst. MVG punished Snakebite 8-0 accordingly, while whitewashed Wright averaged only 82.61 and missed each of his five darts at doubles.

Runner-up in Melbourne, Daryl ‘Superchin’ Gurney, qualified for his first World Series final by beating Simon Whitlock and Rob Cross. In the final, Superchin reached an average of 100.6, marginally higher than MVG’s 99 but flailed at the doubles. The same could not be said for van Gerwen, however, who landed 8 of his 19 double attempts as he ran out the 8-3 winner, his 13th World Series crown and first in Australia since 2016.

As for the shock Brisbane Darts Masters champion Damon Heta, he was eliminated at the hands of Rob ‘Voltage’ Cross in the quarter-finals in an 8-3 victory.

The players will now move on to the fifth of this season’s PDC World Series of Darts events, the New Zealand Darts Masters, which takes place at the Claudelands Arena in Hamilton from August 23-24.

The Betway favourite Michael van Gerwen will be looking to make it two titles in a row after his recent success in Melbourne last week. Mighty Mike insists everyone is running scared of him following his win last week, which feels more like cocky bluster and him trying to convince himself as much as anything else. Betway have taken the bait and chalked him up as 11/8 to do so.

His compatriot, Raymond van Barneveld, whom he beat in the final last year, is gearing up to make his final competitive tournament in New Zealand before retirement. RVB looks miles away from going out in a blaze of glory, however, which is reflected in his long price of 40/1. He should make it past Cody Harris to get to the last four at least.

Daryl Gurney reached his first final for five months in Melbourne last weekend but was unable to capitalise. He was shot down in the final and Superchin goes to Hamilton as an 11/1 shot which looks fair enough given how kind the draw has been to him.

Peter Wright, who opens up against Damon Heta, had a horrible time last week, being ejected by way of a whitewash at the hands of MVG. Snakebite will need up his game considerably if he is to do better in New Zealand, but even then the 7/1 offered on him looks unlikely to pay a dividend.

Gary Anderson and Rob Cross are also in the star-studded field. Both, along with MVG, are in the bottom half of the 16-man draw. For Gary, he hasn’t looked himself for a while now so sharp bettors would probably be wise to steer clear of him even though an outright win for The Flying Scotsman is priced at 13/2 and wouldn’t be a completely shocking surprise. At the same time, Voltage Rob Cross — at 4/1 — has to be tempting.