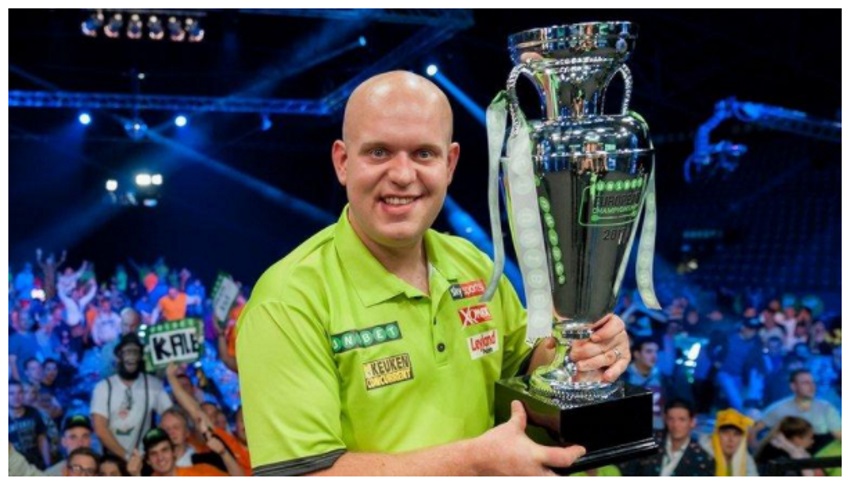 For the fourth time in a row, Mighty Mike van Gerwen has won the European Championship after he beat Rob Cross in the final by 11-7 in Hasselt, Belgium on Sunday night. It was a final the imperious Dutchman nearly missed after coming very close to defeat during his semi-final match against Australian Kyle Anderson.

Having eased past another Aussie Simon Whitlock 10-5 in the quarter-finals, MVG moved on to Anderson. MVG trailed 2-0 and 3-2 before rallying by taking four legs in a row to establish his own lead — a lead from which not many opponents recover. Indeed, that was the fate that would befall Anderson who can consider himself unlucky as the plucky Aussie, an Auckland Darts Masters winner, astonishingly hit two 180’s before finishing with 141.

Despite a further Dutch drive, Anderson was worthy of another four legs before the game went to a deciding 21st leg. Anderson criminally missed two match darts which allowed the World Champion all the invitation necessary to land the 76 needed to snatch victory and progress to the final.

It was uet another final that went all the way with the first five legs all sticking with throw before van Gerwen registered a ten-darter in the sixth leg. MVG then followed with a 12-darter to break and move ahead. Englishman Cross responded in kind to square the game before Van Gerwen started to turn the screws.

At 9-6 up, Van Gerwen landed a seventh 180 including a 130 bullseye, 12-dart finish to move within a leg from victory. The victory was finally sealed soon after with a superb double 16.

Cross, who had previously seen off Dave Chisnall, Michael Smith and Daryl Gurney, averaged 102.39 in defeat in the final, while Michael van Gerwen, who matched Phil Taylor’s achievement of four successive wins in the event, registered a final average of 108.91.

This Friday, November 3rd through Sunday November 5th, the World Series of Darts Finals will get underway at Glasgow’s Braehead Arena, drawing to a close six months of top class international darts.

So far this season, we have visited World Series events in Dubai, Shanghai, Las Vegas, Auckland, Melbourne, Perth and Germany and now it’s all built up to this weekend. A 24-man field will battle it out live on ITV4 as Michael van Gerwen, fresh off the back of a fourth straight European Championship win, is looking to take down the World Series title for a third year running. Betway has the Dutch master listed as 10/11 for the tournament victory.

For the past two seasons, MVG’s defeated final opponent has been Scotland’s Peter Wright, As World Number Three, Wright sees himself as third seed here in Glasgow. Snakebite can be picked up at 13/2 while fellow Scot Gary Anderson is a slightly shorter 5/1 for the outright win.

Next up is Austria’s Mensur Suljovic at the far more generous 18/1, the same price as last weekend’s beaten finalist Rob Cross. Any interest in the wider prices might be best concentrated on more established names such as Barney, out at 25’s, or twice World Champion Adrian Lewis at 33/1. Any faith in either Dave Chisnall or James Wade, each way or otherwise, could be rewarded at Betway with 40/1. That said, in the unlikely event that MVG doesn’t pick up a fourth straight title, I wouldn’t look too far past Peter Wright.

Tournament draws are drafted from the top eight stars from the final World Series rankings, save for Melbourne winner Phil ‘The Power’ Taylor playing on a self-reduced, pre-retirement schedule. These eight will be joined by the next four non-qualified players from the PDC Order of Merit, plus four global invitations and eight additional qualifiers to form the field for this £200,000 event.