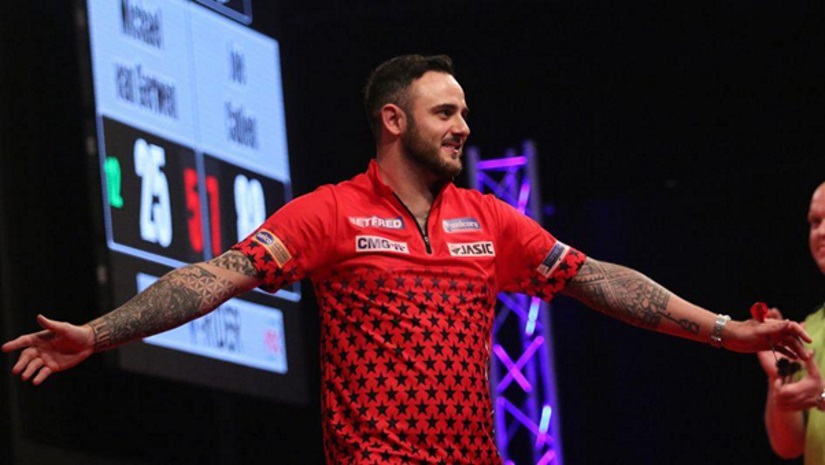 Playing in his first ranking final on a stage, Joe ‘The Rockstar’ Cullen put in a series of brilliant performances at the European Darts Matchplay in Mannheim last weekend, which culminated in him winning the event at the expense of the world champion Michael van Gerwen, who was defending his title.

Since bagging a pair of minor PDC titles back in 2017, Cullen had been expected to become a major player on the circuit, challenging regularly for the top honours. Instead though, he drifted down the ranks while others came from relative obscurity – we’re looking at you Rob Cross – to win the biggest events in darts.

Instead, the closest Cullen came to challenging was running Gary Anderson extremely close in the 2018 World Matchplay quarter-finals and almost making the European Championship final only to fall at the last against Simon Whitlock.

A look back at the action

Last week though, he demonstrated that there was still a player in there as he saw off Jamie Hughes, William O’Connor, Glen Durrant and James Wade before his showdown with Mighty Mike where he would go on to average 101.3 compared to MVG’s 100.18.

Once in the final, the 29-year-old brought the crowd to their feet by scoring a 170 checkout in the seventh leg to move 5-2 up. This was a feat he repeated later to finish from 88, and by doing so, he would clinch an 8-5 victory courtesy of a match-winning 14-darter.

Cullen also managed to successfully convert 17 attempts at doubles while his Dutch opponent wasted 12 of his 17.

Mighty Mike may have lost last weekend’s final to Mensur Suljovic in Austria but got his revenge this time around in Germany by seeing off The Gentle 6-4 in the third round. This was before dismissing Krzysztof Ratajski 6-5 in the quarter-finals and seeing off Dave Chisnall, his eleventh straight win against Chizzy, 7-1 in the last four.

Play now moves on to the German town of Riesa for this year’s International Darts Open. It is the 12th in a series of 13 European Tour events throughout 2019 and will see 48 players competing at the Sachsenarena from September 13-15. As with all European Tour events, all the action is streamed on PDC TV.

The first round takes place on Friday but it isn’t until Saturday that we will see the 16 seeded players enter the event in round two. Names to look out for at this stage include reigning champion Gerwyn Price, Peter Wright and number one seed Ian ‘Diamond’ White. Sadly, Michael van Gerwen and Dave Chisnall have withdrawn with their places going to Host Nation Qualifiers (HNQ) who will be competing earlier than the others except for the South & West Europe Qualifiers (SWEQ).

The betting lines for the event have been shaken up. Rob Voltage’ Cross is the favourite for the event, helped by MVG’s withdrawal. Betway value the Hastings chucker at 5/1. Second favourite is reserved for Peter ‘Snakebite’ Wright at 11/2, and while either of these two are worth considering, this event last year was picked up by Gerwyn Price, who is 10/1 and more than twice the value than those ahead of him.

Daryl Gurney, Glen Durrant and Mensur Suljovic are also fancied at 10/1 with the latter at least picking up a trophy in the last few weeks. Ian White, the number one seed, is priced at 12’s, while Dave ‘Chizzy’ Chisnall is at 18/1. Nathan Aspinall is available at 20/1, while last week’s hero Joe Cullen is a 22/1 to repeat last week’s heroics. Others are, of course, available.