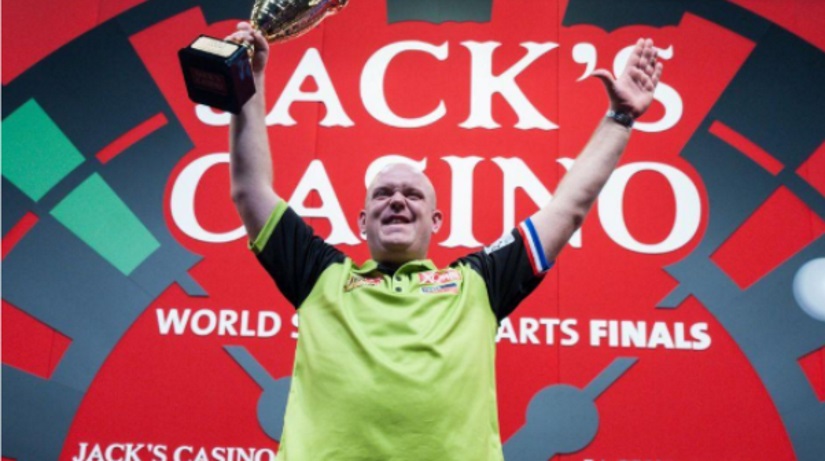 Mighty Michael van Gerwen was back lifting trophies again at the weekend as he collected the World Series of Darts Finals for the fourth time in its five-year history. In front of adoring Dutch fans in Amsterdam, MVG thrashed fellow Dutchman Danny Noppert, who’s performance earns him a spot at Saturday’s Grand Slam of Darts, 11-2 in the final.

How it went down

On his way to scooping up his 50th individual career TV title, 30-year-old MVG cruised past Jonny Clayton 10-6 in the last eight and Mensur Suljovic 11-4 in his semi-final after narrowly avoiding defeat against Gerwyn Price the night before. His opponent, Noppie, had to battle through two nail-biting matches against Ian White and Dave Chisnall, that both went the distance, to reach his first PDC TV final.

Come that final, Van Gerwen threw nine maximums compared to Noppert’s three while Noppie put together an average of 89.37 against the world number one’s 96.95. Mighty Mike also landed nine successive legs after Noppie took down the opener in 12 darts. Van Gerwen out threw himself in the 11th when he failed to make it 10 straight legs by landing two 180s and a 139 to total 499 points with the first nine darts. Leaving only two behind, he bust on his next two visits after he failed to find the double 1.

Noppie duly stepped up and claimed his second leg before MVG threw for the title leaving his countryman to clinch the last qualification spot for Wolverhampton at the expense of Mensur Suljovic. The Gentle will not be present in the week-long major having turned down the opportunity to play in Monday’s qualifying event for this weekend’s televised major.

The Grand Slam of Darts, which features players from both the PDC and BDO, gets underway on Saturday at the Aldersley Leisure Village in Wolverhampton and runs until November 17. The 12th staging of this event takes place without Mensur Suljovic but will see The Iceman Gerwyn Price bidding to defend the Eric Bristow Trophy. 12 months ago, the Welshman took the title controversially having won in a famously bad-tempered final with Gary Anderson.

Both players make up a field of 32, featuring eight representatives from the BDO including two females Mikuru Suzuki and Lisa Ashton, all of which are split into eight groups of four players, with the top two players from each group progressing to the knockout stage.

Red hot Michael van Gerwen has rightly been installed as Betway’s 11/10 favourite as he seeks to reclaim a trophy he once won three times in a row. He starts in Group A where he has former world champion Adrian ‘Jackpot’ Lewis for company and where both should ease through.

James Wade stars in a slightly tougher Group B where Ian ‘Diamond’ White and Wesley Harms could provide testers. Should The Machine make it through a hard group, his odds of 28/1 look tasty, but with such a hard group I would have wanted more. White’s price for outright success is 40/1, but given he has a mental block that prevents him going past the Quarter Final stages of live televised events, this is sure to be a waste of money.

At an outright price of 11/1, Group C looks like an easy win for Gerwyn Price. He has to be a good shot for overall success but could he be joined in the second round by our first female of the weekend? Ladies world champion Mikuru Suzuki is worth 8/1 to qualify which isn’t to be sniffed at, although an outright 500/1 on the Japanese star can safely be ignored.

The Iceman is in fine form right now and is one the top players in the world with the added ability to get under his opponents’ skins. As returning champion, he will arrive here full of confidence. Providing he uses the inevitable crowd boos to his advantage rather than wilting, something he has been doing of late, he has a great chance of winning here again.

Last year’s runner-up Gary Anderson claims this event is his favourite and he goes in Group D, but sadly for The Flying Scotsman, his injury problems and lack of form make him almost unbackable these days. For those still willing the old boy on, Betway are offering an outright price of 16/1 on him reliving his glory days this weekend.

Group E sees Rob Cross and Dave Chisnall as well as lady number two Lisa Ashton, who given the aforementioned pair, couldn’t really have been handed a much tougher group. Likely winner of the group, Voltage has an outright price of 8/1, ahead of Chizzy’s 22/1 with Betway.

Peter ‘Snakebite’ Wright will be the hot favourite to top Group F despite early exits at the European Championship and World Series recently. If he brings his A-game then this group looks a formality, however, any fragility could well let in last week’s losing finalist Danny Noppert or even a threatening Wayne Warren. Betway have priced Wright at 9/1 for the title, while Noppie can be backed at 80’s.

Northern Irishman Daryl Gurney, a 22/1 shot for the title, plays in Group H but should face a challenge here from German star Gabriel Clemens and even BDO man Richard Veenstra. Brendan Dolan also chicks in this lesser group of death.

Finally, Bully Boy Michael Smith goes in the actual group of death where Nathan Aspinall and Glen Durrant await. Smith has made, but not won, four finals this season hence he is the shortest price here, but this group is a tough one to call so bet at your own peril. Betway are paying 22/1 on Superchin to win the title.

The Asp has gone from strength to strength this season since winning the UK Open and US Darts Masters, while Glen Durrant, here on a BDO ticket despite joining the PDC, could easily top this one. Betway have priced both Aspinall and Duzza at 22/1 for outright victory in the years Grand Slam of Darts.

QUICK GLANCE AT THE GRAND SLAM OF DARTS 2019