A packed crowd in Rotterdam were treated to the spectacle of two Dutch masters securing victory last Thursday, when Michael van Gerwen and Raymond van Barneveld both came through night six of the Darts Premier League victorious. 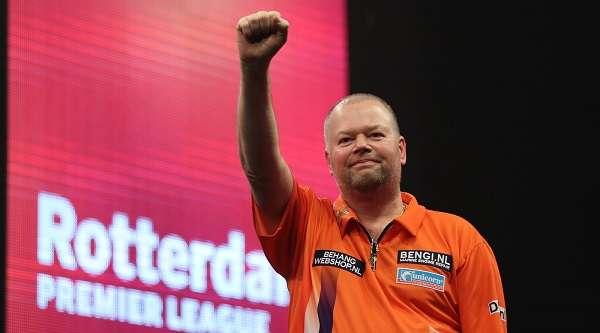 The former required a much-needed fightback to turnaround a 3-0 lead established by arch-rival Phil ‘The Power’ Taylor, eventually closing out the match 7-4 in front of a sold-out Ahoy Arena. The result sees Mighty Mike remain unbeaten and keeps him in touch with Peter ‘Snakebite’ Wright in the table, who remains a point ahead having played one game more.

Before MVG’s triumph, his compatriot also provided the home crowd with the result they wanted when he smashed world number two Gary Anderson 7-2. Anderson could not handle a brilliant Barney who averaged 103.71, landing five 180s before rounding it all off with a superb 156 checkout.

Unsurprisingly, Peter Wright overcame Dave Chisnall without too much resistance. Snakebite continued his good run of form with a 7-4 win against the St Helens man despite playing within himself.

Elsewhere, James ‘The Machine’ Wade defeated Jelle Klaasen 7-3 to leave the other competing Dutchman propping up the rest of the table with two weeks left before the cut. For Wade, this was a victory that ended a three-game winless run and now climbs up to third.

Kim Huybrechts is another player fighting for survival and, with relegation looming, couldn’t afford to lose 7-3 to Adrian Lewis last week. That he did, though, in a bad-tempered match where he blew his cool following an on-stage row with Lewis that led to Jackpot winning six legs in succession, leaving the Belgian without a win in the league so far this year.

First up at the Manchester Arena this Thursday is Michael van Gerwen who makes the first of his two appearances in a week with a match against James Wade, the league’s champion in 2009.

The Dutchman has won their last six meetings and with a superior tournament average of 104 to Wade’s 94, looks a good shout to extend that run here. That said, MVG may pace himself knowing that he has a second game later on in the evening, so it wouldn’t be a surprise if this game was still tied after 4 legs, which is available at 7/4 with Bet365.

What should be one of the night’s easier to call matches comes next as Gary Anderson plays Kim Huybrechts, who hasn’t recorded a win in this year’s League and surely won’t start against the world number two.

Anderson is followed by another Scot as Peter Wright who takes on the legend that is Phil Taylor. Wright is on a great run of form, while Taylor seems to be looking less interested by the week as retirement looms. With this in mind, it’s probably worth backing Wright and yet I fancy it to be one of those weeks where the old Phil Taylor stands up. After a run of four games without a win, he needs to. If he does, can inflict damage on Snakebite. Splitting the difference, we’ll put this one down as a draw.

It’s Jelle and the Jackpot next out with bottom of the pile Klassen taking on Adrian Lewis. I doubt even a relegation scrap can lift the Dutchman from tenth place, so would back a Lewis win every time. Far more interesting is the all Dutch affair taking shape in the night’s final game.

MVG returns to the oche to face off against Raymond van Barneveld who last week emphatically dumped out Gary Anderson. He’ll need to summon up something similar if he is to get the same outcome this time and it’s doubtful he can produce this two weeks in a row.

However, with the world number one having played earlier that night, there may be a slim chance of a Barney win. I’m tempted to leave this one out of this week’s acca but will be brave and back a draw; it’s certainly worth it. An accumulator on MVG, Anderson, draw, Lewis, draw at SkyBet pays out at 82.06/1.

Now that the league has settled enough, we know where the likely winners will come from and so it could prove valuable to get behind a Scottish player to win the tournament. This would include top spot Scot Peter Wright or Gary Anderson, twice world champion. The Flying Scotsman is deceivingly low down in the table but could well find himself in the top three (with Wright) by the end of the night meaning that the 9/4 on offer with Betway wont hang around long.