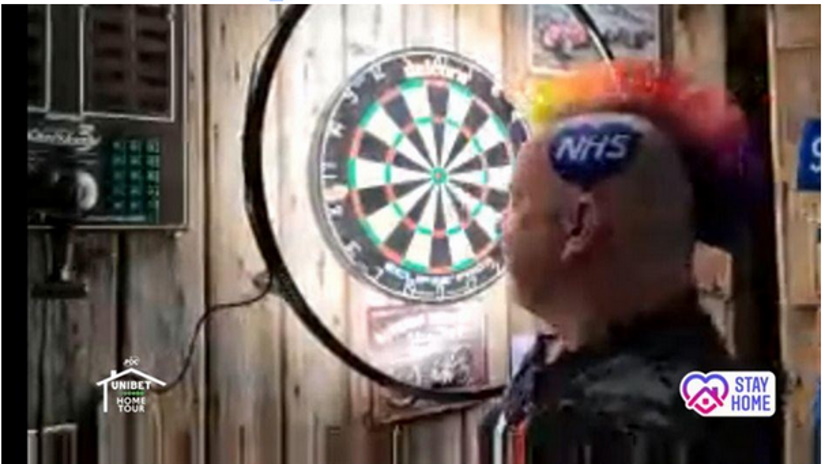 As we know, all PDC Tour Card holders were offered the chance to alleviate the boredom and compete in the first and hopefully only ever PDC Home Tour. It pitted four different players against each other every night over webcam footage streamed out through bet365 TV.

For a £1 bet, viewers get to watch four guys throwing for points in a round-robin format and a final table, the winner of which will move into the following round.

There were three big names missing, however, as new dad Michael van Gerwen did not take part. Neither did Gary Anderson or Daryl Gurney who, despite their sizeable bank balances, both have too poor an internet connection to maintain a stream.

Of the 32 groups, 13 have been played so far. On night 1, Peter Wright, sporting NHS tribute skull paint, was eliminated when he lost 1-5 to group winner Jamie Lewis. Gerwyn ‘The Iceman’ Price followed Snakebite out of the competition the very next night when Luke Woodhouse topped the group.

Dave Chisnall made it safely through on Night 3, and Jelle Klaasen, Jonny Clayton, Nathan Aspinall and Max Hopp, who benefitted from a hastily revised three-player league after Keegan Brown’s internet connection dropped, all join the St Helens chucker in round two.

Tough times call for exciting new measures and the Darts agency MODUS, who represent the likes of Michael van Gerwen, Fallon Sherrock, Peter Wright and Raymond van Barneveld, have come up with an ingenious way of bringing us some live darts while we wait for things to get back to normal. Yes, last week’s live darts made a bit of a comeback as the inaugural MODUS Icons of Darts Live League got underway.

The Icons of Darts format is a series of round-robin leagues that will take place daily from Monday to Saturday each week until Saturday, May 2nd when the overall champion will be announced. The players, including big names such as Paul Nicholson, Mark Webster, Andy Jenkins and Wessel Nijman, will each be competing from their own homes while streaming their play over their webcams.

Darts does at least lend itself to such a format which will help provide us with some much-needed entertainment in these weird times. Each match is best of nine legs and leading online bookmaker bet365 will be live streaming proceedings. Betway will be offering markets on the Icons of Darts tourneys. Correct Leg Score, Total 180s, Most 180s and Score After 4 Legs are all available for your entertainment.

Naturally, you need to sign up to bet365 via this link before either making a deposit or placing a bet, unless you have already done so in the last 24 hours, in which case you will be able to live stream the Icons of Darts through your various devices.

The first week of the MODUS Icons of Darts Live League finished over the weekend when David Evans became the winner of week one. Evans wasn’t even required to throw on Saturday as all players are required to take a day off out of the six and Saturday was his turn. It mattered not though as Wessel Nijman lost out to Mark Webster to on 30 points tied with Evans, who took the top spot on leg difference. Paul Nicholson finished third, ahead of Andy Jenkins.

Ten points behind, the bottom two places include Raymond van Barneveld on 10 points and Mark Webster on 8 points.

Nijman picked up where he left off from week one on Monday night with a victory over Raymond van Barneveld. Nijman also saw off Martin Adams, Ritchie Edhouse and David Evans on a strong opening night in week two. Earlier on, Martin Adams claimed a victory over Edhouse fresh from inflicting defeat on Barney, who in turn finally got some scores on the doors by beating Ritchie Edhouse 5-4.

With the exception of Scott Mitchell, stepping in to replace Martin Adams, the same line-up as Monday goes again on Tuesday. This means that Raymond van Barneveld, Scott Mitchell, David Evans, Wessel Nijman and Ritchie Edhouse all feature in Tuesday’s Icons of Darts.

Raymond van Barneveld takes on Scott Mitchell in the first match of the night. Barney, who has tweeted that he isn’t feeling on top form, looks very out of sorts even on his home oche. To that end, we’d have to back Mitchell on this one.

Mitchell then moves on to fellow BDO man and week one winner David Evans. These two are hard to split but due to his performances last week, we’re just bout leaning towards Evans in this one. Along with Wessel Nijman, Evans has been among the standout players so far.

That, then, makes the big game of the night the 20:30 GMT match between the pair. Wessel beat David 5-4 on Monday despite missing a lot of darts and I would expect a repeat performance on Tuesday.

Players can pocket prize wheel spins to be in with a chance of winning up to €1,000 cash with bet365 Poker by collecting Perfect Pairs.

• In order for play to contribute towards mission completion, you must opt in to each weekly qualifying period by pressing the ‘Start’ button, located in the Missions section of the poker software, before starting your mission.

• All steps must be completed in the order displayed on the above Weekly Steps table. You will receive one spin on the Perfect Pairs Prize Wheel for completing a step, with the exception of steps three, eight and 13, for which you will receive a spin on the Premium Prize Wheel. You can receive a maximum of 13 spins during each weekly qualifying period.

• Prize wheel spins will be awarded automatically, and available spins can be viewed by clicking on the prize wheel icon in the Missions section of the poker software. If unused, prize wheel spins expire at 19:00 GMT on 3rd May 2020.

• Twister tickets awarded from the Perfect Pairs or Premium Prize Wheel can be used to enter any Twister tournament with a corresponding buy-in. If unused, tickets expire 14 days after they are credited.

• bet365 Coins awarded from the Perfect Pairs or Premium Prize Wheel can be used in the bet365 Store. Information regarding the bet365 Store can be found in the poker software.

• €500 Perfect Pairs freeroll tickets awarded from prize wheel spins are automatically credited to your account and are valid for entry to the €500 Perfect Pairs freeroll. This is a 4x multi entry, Turbo tournament which takes place at 20:00 GMT every Sunday throughout the promotion. Tickets for the freeroll expire once registration for the final relevant freeroll closes. Freerolls award cash based on the number of entrants.

• This offer is only available to new and eligible customers.For more information about all offers please visit the bet365 website.