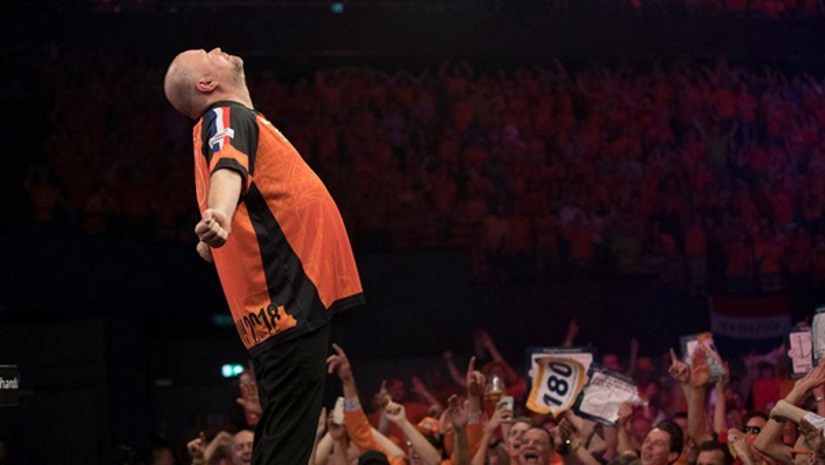 Dutch fans in attendance in Rotterdam were treated by their two heroes — Raymond van Barneveld and Michael van Gerwen — going head to head in a match in which Barnveld delivered a surprising upset.

It was billed as the match of night and it didn’t disappoint as the two finest players the Netherlands has ever produced served up a classic in which Barney fought off a late comeback attempt from the world’s best player, Michael van Gerwen, to win 7-5. Barney, at one point 6-3 ahead, looked to have let victory slip through his fingers as Mighty Mike fought back to almost draw level, before Barney landed a treble 20 followed by double four for the win.

Oddly, this was van Gerwen’s second defeat in as many nights, made even weirder by the fact he was playing back in his homeland. This contrasted Barney, however, who was struggling for form prior to returning to The Netherlands but picked up maximum points over both days.

Michael Smith returned to winning ways with a 7-1 destruction of Simon Whitlock. Smith lost badly on Wednesday to Gary Anderson, but went above the Scot in the table a night later after he sent early league leader Whitlock packing. It was The Wizard who took the first leg when Smith missed two important darts, but Bully Boy took over soon after and reeled off seven legs in succession. The defeat for Whitlock means the Aussie is propping up the rest at the bottom of the table while Smith stays fourth and on target for a playoff place in London a month from now.

Two-time world champion Gary Anderson produced an imperious display against Daryl Gurney to win 7-3. Anderson, who one night earlier almost banked a nine-dart finish against Rob Cross, came close again on Thursday as he opened up with 177 and 180 before blowing it for the second night in a row. He didn’t blow the the match however, as he took out 88 to claim a 4-2 lead before hitting 13 and 11 dart legs, leaving one more for the win which came courtesy of a ruthlessly executed 92.

Peter Wright’s weird form continued as he dug deep to earn a 6-6 draw with Rob Cross. Only 24 hours earlier, Snakebite had surprisingly seen off Michael van Gerwen but was often struggling to hang in there in Thursday’s match against the World Champ. Cross took the lead early on, throwing triple 140s, before landing an 81 to give him a 12-dart opener. Voltage followed this by breaking Wright’s throw in leg two after fans were treated to the familiar site of Peter repeatedly missing important darts at double, in this case four. Before long, Cross was up 5-2, but Snakebite was determined to make a fight of it, winning the next three to draw level. Having fought back, Cross began to wobble, missing six darts at the double but somehow pulled ahead 6-5 ahead before Wright came back to claim a share of the points.

Daryl Gurney returned to the oche for the last of the night’s action needing to put his earlier defeat to Gary Anderson behind him. He did so in emphatic fashion as he beat Simon Whitlock 7-1, the Aussie’s second such reverse of the night. Gurney averaged just south of 100 and scored three maximums on his way to a comfortable victory.

Matchnight 14 takes place this Thursday at the Manchester Arena with all the action broadcast live on numerous Sky Sports channels from 1900 GMT.

Michael Smith has the opportunity to effectively eliminate many by closing off the top four this week should he pick up two points from his two matches. The first of these is the night’s opening game against Peter Wright, although increasingly erratic, should be in confident mood having taken three points off MVG and Rob Cross in Rotterdam. Michael had a tight grip on first but has now slipped down to fourth, but he remains three points ahead of Snakebite with a game in hand. Smith to win and shut out the others? Why not. Bet of the match: Smith to hit the most 180s, no 100+ checkout in the match and both players to average under 100 for 5/1.

Next up is Daryl Gurney and Michael van Gerwen in a match that looks unlikely to throw up any surprises. MVG is the other player playing twice this week and although pegged back slightly last week, two wins on the night would provide him with a cushion at the top of the table as we start to look forward to the play offs in London. Superchin stands a slight chance of making the top four himself, but I expect Mighty Mike to extinguish that here. Add to Michael’s value by jumping on van Gerwen to win by over 2.5 legs, hit a 120+ checkout and over 7.5 total 180s for 11/2 at Betway.

Simon Whitlock, who has an even more remote chance of progression than Gurney, is out next for his match against Gary Anderson, a near certainty for the O2. Like the previous match, this matchup looks unlikely to shock anyone — the Flying Scotsman all the way. For 11/4, I think it’s worth backing Anderson to win by over 2.5 legs, hit the most 180s and a 100+ checkout.

Barney enjoyed his time back in Holland last week, picking up maximum rewards for seeing off Simon Whitlock and Michael van Gerwen. He goes again here against Rob Cross, who also handled the Dutch experience well, taking three points from three games. Like Gary Anderson, Voltage is still in the running to get that number one spot, sitting just a point behind MVG. Raymond’s form last week looked more like a flash in the pan and proved he still had the class of old. Back in the UK, I think the young blood of the World Champion will win out. I’ll go with Cross to win, hit the most 180s and hit a 100+ checkout for 4/1.

The two Michaels finish off the night’s action, and assuming both win earlier on in the night, both will be in buoyant mood for the night’s finale. That said, MVG will be looking to bank his place on top of the pack and should dominate Smith, who is deserving of a place in the play-offs even if he loses out here. Betway continues to make things interesting by offering van Gerwen to win by over 3.5 legs, average over 100 and under 7.5 total 180s at 9/4.

The line on Smith, MVG, Anderson, Cross and MVG pays at a rate of 11.15/1, while Betway have also boosted the following treble to 5/1; Wright, Anderson and Cross to win.