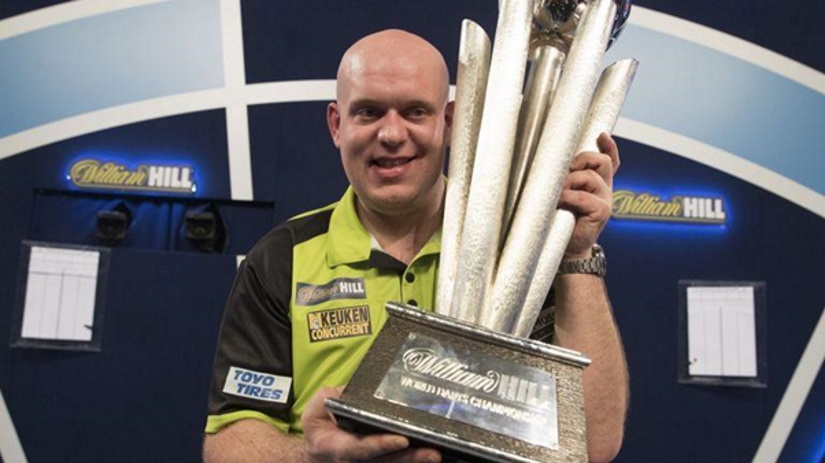 Michael van Gerwen collected yet another award at the weekend when he took down the Player Championships Finals in Minehead. He did so at the expense of Gerwyn Price, who had beaten MVG a week earlier when he successfully defended his Grand Slam of Darts title.

This time though it was The Iceman who felt the heat while once again playing like one of the very best players on the circuit right now. The absolute very best, however, is the Dutchman, who hit the year’s first and so far only televised nine-darter on Saturday, and who in the final came out on top 11-9 even if he only just narrowly avoided being dragged into a deciding leg.

The Dutchman wins another

Despite both players averaging under 100, the final was an entertaining affair, packed full of drama, in which the duo traded legs repeatedly. Oddly, the pair missed 17 darts at double between them before Van Gerwen eventually drew first blood on double two. From there, the game followed a routine pattern until Price led for the first time at 7-6 and later 8-7.

Mighty Mike then began to put the squeeze on proceedings and moved to 10-8 ahead before doubling his lead with double 12. One break later and The Iceman’s momentum looked like deserting him and he could only watch while MVG reeled off three consecutive legs in 15, 14 and 14 darts.

The Welshman fought back though, driven on by the fact that he has finally overcome his MVG hoodoo, and a classy 13-darter kept his hopes alive. These hopes disappeared, however, when Price narrowly missed out on double tops that would have taken the game to a decider but instead allowed the world champion back in to take his 51st individual career TV title and fourth in as many weeks.

Earlier on in the weekend, Mighty Mike had landed a stunning nine-darter against Adrian ‘Jackpot’ Lewis, himself a two-time world champion. He followed this up by triumphing in a poor quality, bad-tempered quarter-final against Mervyn King in which MVG labeled The King as being bad for darts. Diamond Ian White finally made it past the quarter-final stage of a televised tourney only to run into MVG, who dismissed him in an 11-8 semi-final victory on his way to meet The Iceman.

Speaking of The Iceman, who continues to turn jeers into cheers, he met and overcame Mickey Mansell 6-3, whitewashing Keegan Brown before putting Mensur Suljovic away 10-4. He then moved on to Stephen Bunting (10-3) and Chris Dobey (11-8) before appearing in his third major final in four events.

Sunday’s win was the perfect preparation for Van Gerwen, his 14th title of the year so far, ahead of next month’s World Championships, where he’ll be bidding to land a fourth title on New Year’s Day. He is also one step closer to knowing who his first-round opponent will be after the draw for the Ally Pally was made this week.

This year, the Championships run from December 13 to January 1 and, as always, take place at London’s Alexandra Palace. Make no mistake, this festive event is the biggest event in darts featuring 96 players.

On New Year’s Day 2019, Michael van Gerwen beat Michael Smith 7-3 to win the Championships for the third time. Mighty Mike is unsurprisingly the favourite to retain his title and get his hands on the Sid Waddell Trophy once again. Judging on current form, Gerwyn Price looks to be his biggest threat but don’t ever rule out the likes of Peter Wright, Michael Smith or Rob Cross either. Full preview coming up soon.