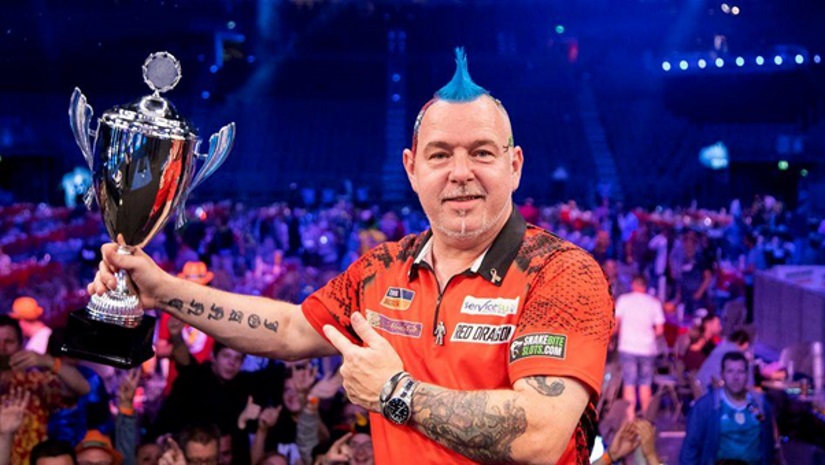 In Cologne last Sunday, Peter Wright defeated Gabriel ‘The German Giant‘ Clemens 8-6 to win his first lone PDC title of the season. It’s been nothing short of a disastrous year for Snakebite so far, so this title will go along way towards repairing the damage. Not bad timing either given that the Darts World Matchplay gets started this coming weekend.

For Wright, this was his first individual PDC title of the season following the World Cup of Darts which he won alongside Gary Anderson last month and his first solo title since he took down the Melbourne Darts Masters almost one year ago. This, the fourth televised title of his career, is also the second time in three years he has won this particular title, having tasted victory in at the Castello Arena in Düsseldorf in 2017.

Clemens, ranked 56 in the world, put in a superb effort overall in front of 8,000 home fans at the Lanxess Arena where he saw off the challenges of Raymond van Barneveld, Rob Cross and Mensur Suljovic before qualifying for his third final of the season.

In truth, once at the final, both players underproduced but Snakebite did manage an average of 93.27 which was slightly better than Clemens’ 92.69. The Scotsman also banked three more 180s than The Giant with five, while he also pinned 23 of his double attempts with his opponent missing 15 from 21.

It was Clemens who seized the initiative, however, as he raced into a 3-1 lead before Wright pulled it back to 4-4 prior to moving ahead with an 11-darter, after which The German Giant was unable to catch up despite enjoying overwhelming home support. One round earlier Peter Wright had overcome James Wade, who dumped out Daryl Gurney in the quarters, while Gary Anderson didn’t make it past the opening match after losing to 22-year-old Nico Kurz.

The 26th World Matchplay Darts will get underway on Saturday, July 20 at Blackpool’s Winter Gardens. Opening night comes complete with four matches, all of which play to the best of 19 legs. Thereafter, there will be four first-round matches every afternoon plus four in the evening session before the second round begins on Tuesday and runs until Wednesday.

The Quarterfinals play over two nights — Thursday and Friday — before Saturday hosts the best of 31 semi-finals after which the final (best of 33) on Sunday. Oh, and each match has to be won by 2 clear legs, and if this still isn’t the case after six extra legs, the players will play a sudden death tie break. That and the top sixteen seeds are all kept apart in the first round.

The defending champion is Gary Anderson, who won the Phil Taylor Trophy last year by beating Mensur Suljovic in the final. If The Flying Scotsman can reproduce that kind of form he is going to be difficult to stop. However, he has been plagued by a back problem since the 2019 World Championship, forcing him to sit out this season’s Darts Premier League. Anderson can be backed at a pretty generous 9/1 but remember, just one week ago he lost in Cologne to Nico Kurz, currently ranked 172 in the world.

It goes without saying that Betway’s favourite for the 2019 World Matchplay is 11/10 shot Michael van Gerwen. MVG won it back to back in 2015 and 2016 but hasn’t reached the final here since then, even crashing out in the first round last time so all hope is not lost. However, you cannot underestimate the threat of Mighty Mike who is almost unplayable on his day. In what has been a supposedly off-form season for the Dutchman, he has already racked up the PDC World Championship, The Masters and the Premier League Darts this year.

A look at other World Match Darts centenders

Given that he has been given a favourable draw, Daryl Gurney looks an attractive proposition in the outright betting. Betway are 22/1 on the Northern Irish player who opens up against qualifier Ricky Evans with 14th seed Jonny Clayton likely to follow and, in all likelihood, either Simon Whitlock or Peter Wright next and Rob Cross thereafter. These are all players that Gurney will not fear so an each way bet looks to be a very cool idea.

Wright, though, is finally back on the up. Snakebite takes on Vincent van der Voort in his first match at the Matchplay on Monday evening, fresh off the back of winning in Germany and claiming the Players Championship 19 title on Tuesday. Such form has seen his price dip at Betway to 12/1. It’s been a dodgy 2019 so far for the Scotsman, who finished eighth in the Premier League. He remains a talent, and when he is on his game, is a thoroughly popular member of the tour. Wright reached the semi-finals here 12 months ago and the final the year before so he is known to go deep at Blackpool and is one to watch out for.

Another player in form is Nathan Aspinall. Despite never having qualified for this competition before, Aspinall finds himself in the draw as a top-16 seeded player. A semi-finalist in the 2019 World Championship, the 27-year-old went on to take the UK Open in March and the US Darts Masters a fortnight ago. The Asp opens up against Mervyn King and really shouldn’t be struggling given his current form. To win outright at The Winter Gardens, The Asp is worth 25/1, also at Betway.

For another pick, we suggest James Wade, who plays Jeffrey de Zwaan on Sunday night. Over the last 18 months, they have played together four times with The Machine undefeated, making this look like an easy win for Wade, who is a former winner and six-time finalist in this competition. In fact, Wade, who could potentially meet Michael van Gerwen in the semi-finals, is the only other player other than Taylor, Van Gerwen and Anderson to win the World Matchplay in the last 13 years. Wade dismissed both MVG and Daryl ‘Superchin’ Gurney in the Premier League this season, plus reached the final of the 2018 World Series and the 2019 Masters, so must be feeling that he is due something big soon. The Machine is certainly capable of winning this event, especially if he maintains his Premier League form. However, he has been drawn in the same section as Michael van Gerwen, so that is going to be a tricky quarter-final to navigate, which is why Betway have stretched his price to 20/1.

Rob Cross has played the World Matchplay twice before, crashing out in the second round on both occasions but, due to a decent if not spectacular showing in 2019 so far, he has been installed as the 15/2 second favourite. The 2018 World Champion has yet to win a second title but is second in the PDC Rankings and no one saw his inaugural title win coming so you never know with Voltage.

Last year’s Grand Slam of Darts winner Gerwyn Price has little Blackpool pedigree to speak of, having reached the quarter-finals in his first attempt and not making it past the second round since. But he showed good form in both the UK Open and the Premier League Of Darts so there is no doubting that the Welsh former Rugby layer is now a serious player on the circuit. After a quiet few weeks, expect The Iceman to resurrect his pantomime villain persona and the notorious Winter Gardens crowd to respond in kind. Price though absolutely loves it and the atmosphere won’t buckle him whatsoever. He has landed in the kinder side of the draw too, avoiding MVG and, if he makes it that far, potentially meets Rob Cross in the semis, all of which makes The Iceman a very decent outside punt at 16/1 and one that I won’t be turning down.

For those thinking that Michael Smith can be expected to put in a decent showing at the Winter Gardens, Betway have priced him at 25/1 to be the outright winner. While his Premier League campaign wasn’t to be his finest hour, Bully Boy, who came runner up in last year’s World Championships, has still produced some of the best darts of his career in 2019. A deep run at this event is a distinct possibility.

Other outside mentions go to PDC new boy Glen Durrant who is a 40/1 shot and the always dangerous Mensur Suljovic at 33/1.