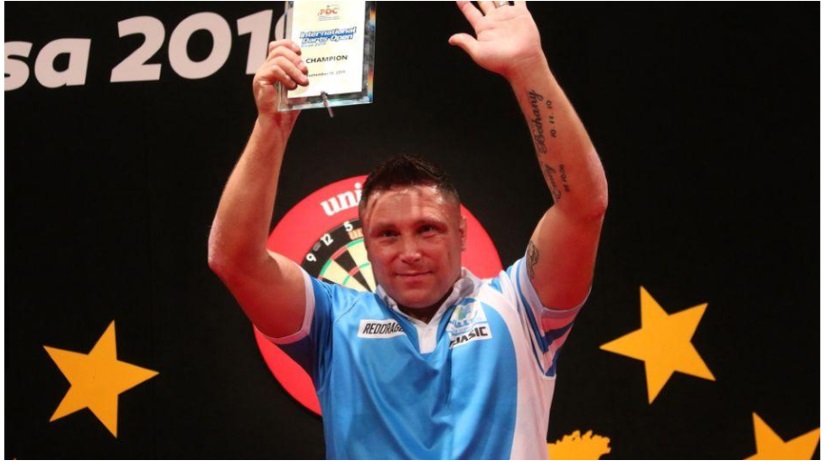 The Welsh Iceman, Gerwyn Price has successfully defended his International Darts Open title in Riesa, Germany. Twelve months ago, the former Rugby player overcame Simon ‘The Wizard’ Whitlock to claim his maiden European Tour victory, a feat he has now repeated, this time at the expense of Rob Cross.

Voltage, the World Matchplay champion, was vanquished 8-6 in a closely-fought final where he averaged 90 to Price’s 93. Cross was hunting what would have been the maiden European Tour title of his career. He had initially opened up a 4-2 advantage after checking out from 148. Instantly though, Price hit back with a 121 to complete a 12-darter. Before long, Price finished the job in style with a 108 checkout. Pinning two 180s each, neither player was in great finishing form. Voltage failed in 10 of his 16 double attempts, while The Iceman misguided eight from 21.

Other action from International Darts Open

34-year-old Price’s route to the final saw him take on and dismiss Joe Murnan as well as UK Open winner Nathan Aspinall, both by 6-4 score lines. In the last four he met with Glen Durrant, who was also sent packing, this time in a 7-3 win.

As for Voltage, he thrashed last week’s European Tour winner Joe Cullen 6-0 in the third round before moving on to Richard North, who was dealt with equally brutally, 6-1. Things were a little less comfortable in the semi-finals where a 7-6 score line was enough to move into the final at the expense of Peter ‘Snakebite’ Wright.

The draw for this year’s Champions League of Darts, which pits the world’s top eight players against each other over two days, has now been made. The event starts on October 19 and takes place at the Morningside Arena in Leicester. The reigning champion here is Gary Anderson, who will open up his defense against Michael ‘Bully Boy’ Smith.

The BBC-televised tournament works by splitting the participants up into two groups of four for a round-robin phase which is held over the opening three sessions of play. This is followed by the top two from each group competing in the semi-finals and final.

With only the world’s best eight competing, there are no easy games, but all the same Group A looks like a particularly frightening prospect. Gary ‘The Flying Scotsman’ Anderson has been handed the same group as World Champion Michael van Gerwen, World Championship finalist Michael Smith and reigning European Champion James Wade.

We’ll take a better look at the prices close to the event, but right now, ante-post betting at Betway is worth taking a look at. Michael van Gerwen leads the betting at 11/8 which will surely only draw in as the event gets closer. Rob Cross is currently at 9/2, while Peter Wright is at 6/1 and Gary Anderson 7/1.

Rounding out the odds are Michael Smith, who is priced 10/1, with Daryl Gurney, James Wade and Gerwyn Price all fancied at 12/1.