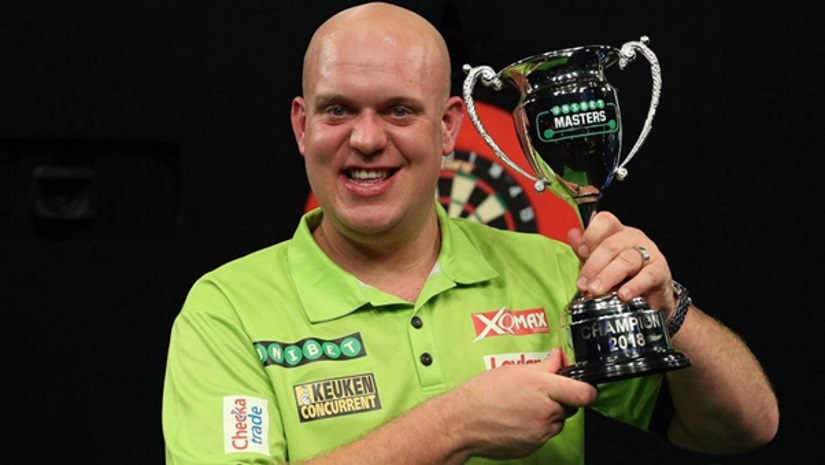 For the fourth time in a row, Michael van Gerwen, the world’s number one darts player, was crowned the Darts Masters champion at the Arena MK. This victory came via a brilliant 11-9 win over Raymond van Barneveld in a thrilling final in Milton Keynes on Sunday night.

In truth, it was a hard-fought battle as the 28-year-old came from 4-1 and 8-5 down against his fellow Dutchman, averaging 100 across all four of his Masters’ matches in total.

On the way to Sunday’s showdown, MVG had overcome Kim Huybrechts, demolished James Wade 10-2 before dispatching Gary Anderson in the semis.

50-year-old van Barneveld, who started out at the weekend as a 33/1 outsider, showed the form of his younger years when he too was world number one, beating Dave Chisnall, Peter Wright and Mensur Suljovic, who had eliminated Rob Cross in the quarters along the way.

In the final, Barney raced into an early 4-1 lead thanks to checkouts of 72, 76 plus a 13-darter. The gap remained the same after seven legs (5-2) before van Gerwen galvanised a response from himself and hit back to level by landing two 177 scores in an 11-darter and break-of-throw before scoring a 137 finish for a 12-dart leg.

However, RVB wasn’t giving up his well-earned lead without a fight, taking down another thee legs to maintain an 8-5 advantage, only for van Gerwen to strike a 124-bull finish. This was followed by a 12-darter allowing him to finally move ahead for the first time in the contest, from where he closed out the match courtesy of an 81 finish making for a title winning 12-darter.

Defending champ Mighty Mike, bidding to win his fourth Premier League Darts title, now heads into the opening night of the new Premier League season in Dublin on Thursday as the Betway favourite at 4/5. No surprises there. Elsewhere, things have a fresh feel this year as the League welcomes a few debutants. World Grand Prix champion Daryl Gurney, Champions League of Darts winner Mensur Suljovic and 2017 UK Open finalist Gerwyn Price all come in for their first Premier League, as does World Champ Rob Cross.

World champion Rob Cross is second in the outright betting at 7/2 at Betway, while Gary Anderson can be picked up at 6/1. Backers of Peter Wright can do so for 9/1 before the long-range picks can be found, starting with Raymond van Barneveld at 33/1. He is followed by Daryl Gurney at 40/1, Mensur Suljovic at 50/1, Michael Smith at 80/1, Gerwyn Price at 125/1 and Simon Whitlock at 200/1.

The night’s opener pits Mensur Suljovic against Simon Whitlock, for which we fancy the Austrian over the Australian, who could suffer against Suljiovic’s slow throws. Gary Anderson is next out against Michael Smith, and I can only see one winner – The Flying Scotsman. That is, of course, so long as his increasingly problematic back holds out.

Matchday one, game three sees the return of Barney fresh from his final appearance in last week’s Masters. His rival here will be Daryl ‘Superchin’ Gurney and the Northern Irishman should be able to get Dublin’s support behind him to make it an uncomfortable night for Barney, who should expect to win regardless.

MVG goes in the night’s fourth match of five, an intriguing re-match with newly crowned World Champion Rob Cross. The Englishman has something of an upper hand over the Dutch number one, something that van Gerwen must recognise as he has let his composure slip against his younger rival in the past. Cross’ inexperience at this weekly format might mean he takes a while to settle into the swing of things. If MVG plays to his usual ability, it should be enough to see him bank his first points on the board.

Up last is Peter Wright and Gerwyn Price. A lot is expected of Peter ‘Snakebite’ Wright as he looks to avoid becoming one the game’s great “nearly” men. The Premier League suits him though and he should be backed to make the cut after judgment night. Snakebite has a great record against Price, and I’m going to back him in the last of the night’s action. 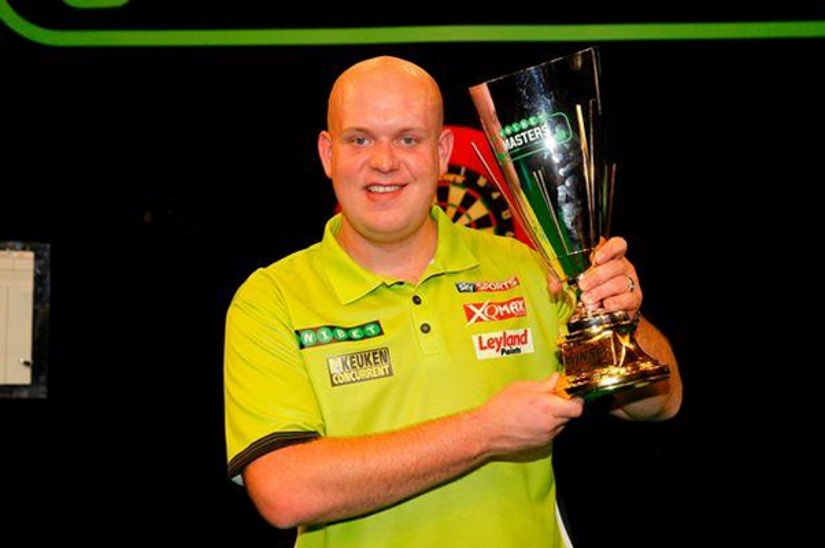 A whole new year of super darts action begins again this weekend as the Darts Masters get underway. Bringing together the world’s top 16 players, these select few will compete in the season-opening tournament being held from January 26 through 28 at the Arena MK in Milton Keynes with events due to be broadcast live on ITV4.

World number one Michael Van Gerwen has claimed the title for the past three years and with Phil ‘The Power’ Taylor now having left the oche, all eyes will inevitably turn to newly crowned World Champion Rob Cross to provide the biggest challenge to the Dutch master.

Cross begins his first tournament as World Champion in Friday’s opening night session against Ian White, while MVG will open his bid for a fourth successive title against Belgium’s Kim Huybrechts.

The tournament will conclude on Sunday, January 28, with the quarter-finals in the afternoon session and the semi-finals and final in the evening session at Arena MK.

In a tourney with no low-ranked players in an event played early in the calendar year, this is never an easy one to call. That said, Mighty Mike has won the previous three, so it has been a while since the event threw up a surprise.

At an 8/11 outright price on Betway MVG doesn’t represent any value. In addition, just how well Rob Cross deals with his new status and its added pressure will be interesting to see. While we do expect Cross to have a very, very strong year, his first tourney since his World Championship will give us a clearer indication of his current mindset. Betway have him down as a 4/1 shot, which is hard not to be tempted by.

On the downside, he does have the tougher side of the draw but given the recent form shown by the next two favorites — Gary Anderson (7/1) and Peter Wright (8/1) — Cross remains a decent bet. Daryl Gurney follows next at the Betway sportsbook, but at 33/1 Gurney along with Raymond van Barneveld lead the distant chasers. Before discounting this group, remember that Rob Cross was himself, only one month ago, xx/1 to win the World Championships. Could he inspire others?

On Monday night at London’s Dorchester Hotel, the PDC staged their annual awards ceremony. Although providing little in the way of surprises, we’ll quickly run through the winners here. Michael van Gerwen was named as the PDC Player of the Year, while Rob Cross was named Best Newcomer. This was one of four wins for Cross on the night, who also scooped the PDPA Players’ Player of the Year, the PDC Fans’ Player of the Year and the Televised Performance of the Year, awarded for his brilliant World Championship semi-final defeat of reigning champion Mighty Mike van Gerwen over 11 thrilling sets including a sudden-death finish. 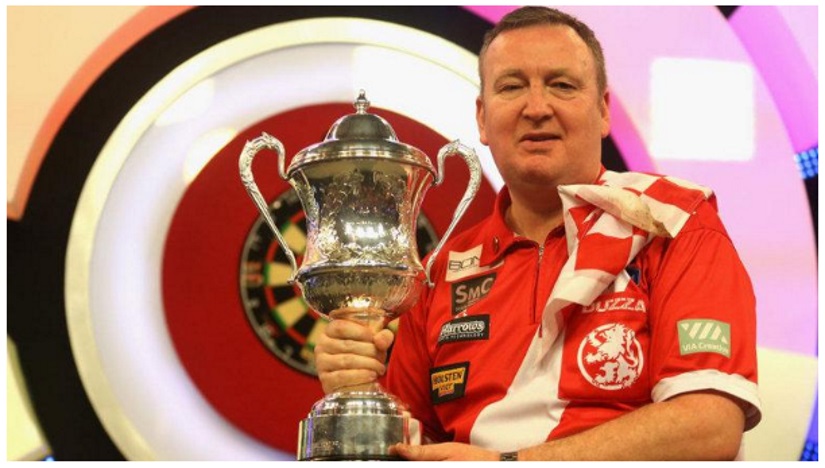 Last Sunday, Glen Durrant successfully defended his BDO world title after he capitalised on Mark McGeeney’s double miss as he was throwing for his own victory. The match couldn’t have been tighter, but McGeeney’s missed two darts for the title allowing Durrant to step up and land his tourney winning shot at double three, giving him a 7-6 victory at Lakeside.

The first eight sets went down to the throw with Durrant, 47, not taking the lead in the match until the ninth. The defending champion went on to lead 6-4 before McGeeney fought back to level at 6-6. Even then, Durrant misfired a host of shots at double before eventually landing the brilliant 149 checkout he required to move to within a leg of the title. Missing his first three darts, Durrant finally took out the double three following McGeeney’s collapse.

Duzza can also be expected to add to his tally in the BDO after reluctantly calling time on his long-expected switch to the PDC. Admitting the “dream” move is over, Durrant said: “I’m unfortunately BDO for life. That’s probably hugely disrespectful to everybody but I did have a dream to do a Rob Cross. At my age, I’m not waiting another year so I’m going to try and win this title again and stick down that route.”

This will not be a career path shared by 31-year-old Jamie Hughes, who has confirmed that he will be moving over to the PDC, attempting to qualify by winning a PDC Tour Card at the Q-School.

Speaking of the PDC, the 2018 Masters is the next major darting event, opening up the 2018 schedule. Getting underway in Milton Keynes on January 27, events will be broadcast on ITV Sport. Qualifiers and match schedule is listed below.

Finals begin at 7 PM on January 28