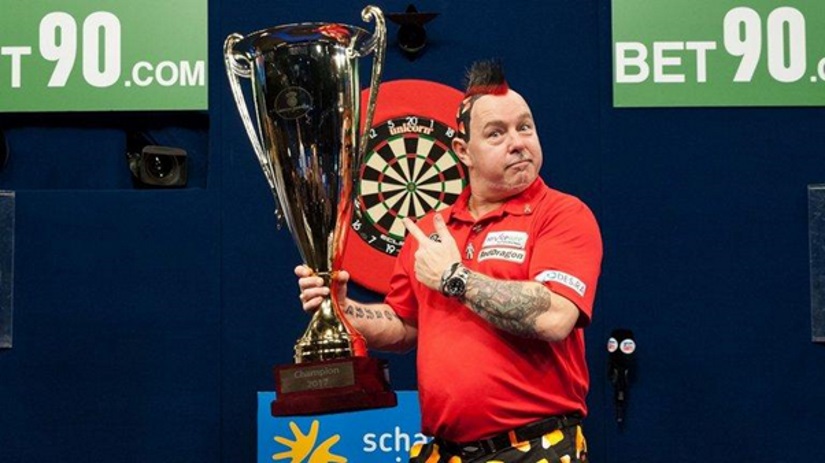 World number three and UK Open champion, Peter ’Snakebite’ Wright claimed his first ever World Series of Darts title on Saturday when he overcame the once imperious Phil ‘The Power’ Taylor in the German Darts Masters final at Dusseldorf’s Castello Arena.

The Scotsman, who finished Sunday’s final with an average of 102.25, got off to a great start, checking out with 116 and a 12-darter in the first leg before following up with double 12 and a 13-darter to take a 2-0 lead.

By leg three, Taylor had struck back, but Wright subsequently took the next three successive legs to establish a 5-1 gap. Taylor would soon fight back by taking back-to-back legs, but ultimately those efforts would prove futile.

A 180 finish saw Wright restore a four-leg lead at 7-3 before stretching it to five with a 61 finish. After another 180, Wright was up 9-3, moving him to the brink of a victory that came not long after a another 12-dart leg, finishing on double ten.

Earlier in the week, Wright had seen off Dragutin Horvat and Mensur Suljovic, before overcoming Raymond van Barneveld in the semi-finals.

The tournament was of course missing Michael van Gerwen who withdrew on Saturday morning, due to an ankle injury. The world number one should, however, line up this week for the European Championship at the Ethias Arena, Hasselt, Belgium.

The event gets underway this Thursday and runs through Sunday. MVG will be bidding to win the title for a fourth successive year. Despite his recent injury, the Dutch master is the number one seed after finishing on top in the European Tour Order of Merit by winning six of this season’s 12 European Tour events. Peter Wright finished in the Order’s second place having claimed five events. The last was won by Michael Smith in Gibraltar back in May. Smith currently sits in third place in the order.

These results are all reflected in the betting lines as van Gerwen can be picked up at a best price 4/5, Peter Wright 9/2 and Smith 25/1, all at Betway. The entire field is made up of the top 32 on the Order of Merit list, but will be sadly lacking Phil Taylor, Gary Anderson, Raymond van Barneveld and James Wade.

Both Daryl Gurney and Mensur Suljovic have had strong finishes to the year and are reflected in the updated betting lines. Northern Irishman Gurney and Austrian Suljovic are both worth 16’s at Betway which is genuinely quite tempting. Further down the line, Rob Cross (16/1), Dave Chisnall (25/1) and Simon Whitlock (40/1) and perhaps even Gerwyn Price (66/1) are all worth keeping an eye on. 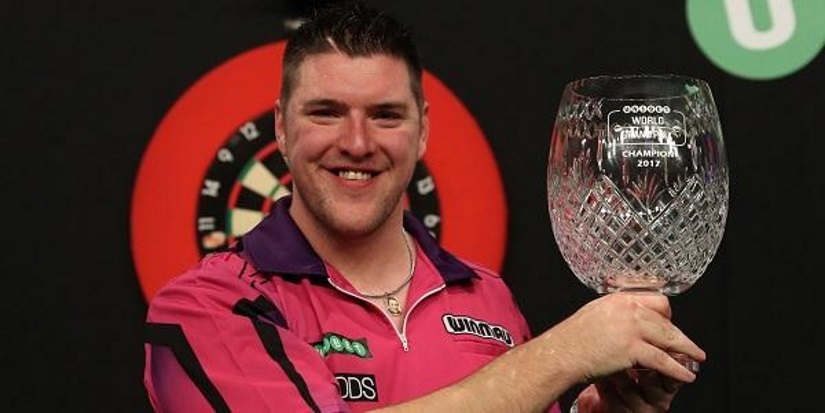 Saturday saw a brand-new victor in live televised darts as Daryl Gurney emerged victorious at the World Grand Prix after overcoming Australian Simon Whitlock 5-4 in the final at the Citywest Hotel in Dublin.

The win, his first live TV event and first televised ranking final, was reward for a fine year at the oche for the Northern Irishman who has burst into the world’s elite in 2017 and now moves up to a career-high sixth on the PDC Order of Merit.

A quick start for Gurney

Gurney was on top from the start, taking the first two sets from the vastly more experienced Whitlock who subsequently fought back to take the lead at 4-3 following Gurney’s missed dart at a double.

The final two sets went Gurney’s way though when he won the eighth set 3-1 before landing double ten in the final set to claim the title before breaking down in tears as he celebrated the win.

“I’m lost for words – I can’t believe it, I really can’t. It feels better than anything else I’ve ever felt in my life. Dreams do come true and this is a dream,” said Gurney.

Naturally, the win has affected the current prices for December’s PDC World Championships at The Ally Pally. Act now and Daryl Gurney can be picked up for the winter’s big one as an outright winner for 25/1 the best price around by a wide margin.  Another recent winner, Mensur Suljovic, is also 25/1 before the prices begin to drift out.

In just over a month’s time, the unique Grand Slam of Darts takes place where the best of the PDC compete against the best of the BDO. Before then, however, is the World Series of Darts Finals in November with the invitations for the three-day event confirmed.

Taking place after the conclusion of the worldwide World Series of Darts events, championship marks the end of the darts season. Eight players are taken directly from the World Series of Darts rankings, meaning Scottish pair Gary ‘The Flying Scotsman’ Anderson and Peter ‘Snakebite’ Wright plus Raymond van Barneveld, James Wade, Daryl Gurney, Kyle Anderson and Gerwyn Price will all be joining Michael van Gerwen in Glasgow. MVG, by the way, will be challenging to win a third successive title at Glasgow’s Braehead Arena.

Note, there will be no Phil Taylor, who has opted not to participate. Adrian Lewis, Mensur Suljovic, Dave Chisnall and Jelle Klaasen will all be in attendance though as the top four non-qualified players from the PDC Order of Merit. 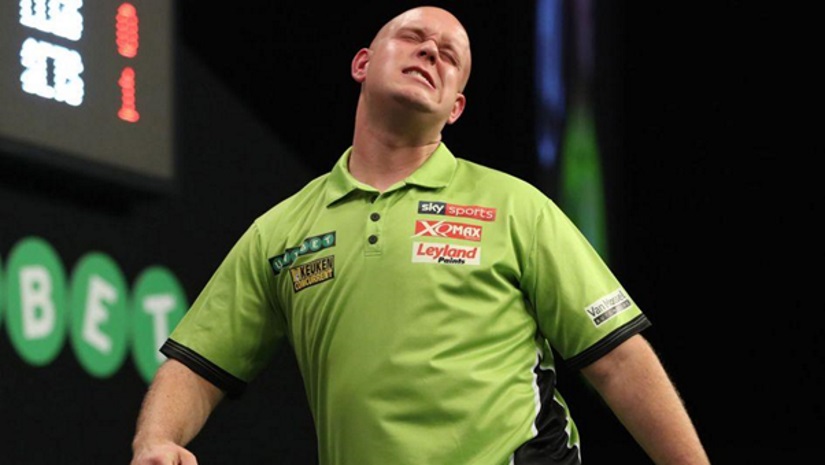 Starting the World Grand Prix as a 500/1 longshot, John Henderson sent shock waves around Dublin on Sunday as he spectacularly dumped the heavily odds on world number one, Michael van Gerwen out of the tournament in the first round.

It was a rare result and one of which no one was expecting, executed in brilliant fashion. The shock 2-1 victory represents one of the biggest upsets in darts history and as a result has blown the tournament wide open. With the victory, Henderson’s outright price has been slashed to 40/1.

Henderson victory opens up the field

Scottish Henderson, ranked number 32 in the world, took the deciding leg of the first set before van Gerwen came back to win the second set 3-0. The Dutchman then put in a horrorible performance in the final set as Henderson punished him twice for missing doubles to lead 1-0 and 2-1 before taking the match with a brilliant 17-darter.

With world number two Gary Anderson also a no-show — having pulled out due to the imminent birth of his next child — the rest of the field senses a real opportunity to win an event. Notably absent is 11-time World Grand Prix champion Phil ‘The Power’ Taylor, who has skipped this event in order to focus on other potentially winnable majors before his retirement.

Play continues Thursday at the Citywest Hotel Convention Centre with the quarter-finals where current favourite Peter Wright will match up against Mensur Suljovic. Snakebite is Bet365’s 15/8 favourite to win the double-start tournament which will provide him with his second televised major in the process.

Snakebite is also lucky to be alive in the tournament after nearly biting the dust after dropping the opening set in last night’s match with Mervyn King. Prior to the match he was seen suffering with a sore elbow picked up in the practice room. Despite the setback, Wright managed to bounce back in to win 3-1 to set up tonight’s meet with 5/1 Suljovic. Snakebite will be seeking revenge for the group stage defeat he suffered at the hands of the Austrian at last month’s Champions League of Darts. Suljovic has some momentum behind him as he aims to claim his third PDC title in three weeks.

In all, just three seeds remain in a wide open World Grand Prix, with all remaining hopefuls now believing they have a chance of winning the big one on Saturday.

With Betway still to publish, all of the following outright prices are bought to you by Bet365.

First out tonight is Simon Whitlock (11/1) v Benito van de Pas (14/1), followed by John Henderson (40/1) v Raymond van Barneveld (7/2). Then it’s on to Wright’s match – where he is 1/2 with Betway to win. This price sounds fair but don’t be surprised to see Suljovic emerge victorious (13/8). ShouldSuljovic win this tourney, he will move just behind Snakebite in the world pecking order at number four. Finally, Robert Thornton (20/1) v Daryl Gurney (9/2) are last out to wrap things up for the night.

Play takes place as a best of five sets with broadcasting getting underway on Sky Sports Main Event at 19:00 BST.