It has been a superb opening first week of the 2017 Darts World Matchplay as a whole host of big names dropping out early doors. Naturally, this doesn’t include Michael van Gerwen who is, of course, still in the hunt with his usual murderous intentions.

The big Dutchman steps out on Friday against Phil ‘The Power’ Taylor having dismissed Simon Whitlock on Wednesday night as he rolls on into tonight’s quarter finals.

Peter ‘Snakebite’ Wright was the star man last night after smashing Darren Webster 16-12 in the second of yesterday’s QF games, the first being Daryl Gurney’s follow up match to his brilliant victory against Gary Anderson on Tuesday. Then, Gurney beat world number two and second seed Gary ‘The Flying Scotsman’ Anderson 11-9 and last night he followed up that brilliant achievement with another as he ran out the 16-13 winner against Mensur Suljovic.

Anderson’s defeat in the week saw him join James Wade, Gerwyn Price, Justin Pipe and Kim Huybrechts in the ranks of the eliminated and Wednesday night thinned the herd even more as Dave Chisnall lost to Alan ‘chuck’ Norris who tonight faces Adrian Lewis.

Tonight also sees Phil Taylor take on Michael van Gerwen as the old master takes on the new king of darts. Taylor it was that ended the challenge of another hero of the game, Raymond van Barneveld on Wednesday night.

This headliner event is preceded by Alan Norris’ battle with Adrian ‘Jackpot’ Lewis. Should, as expected, Lewis win, he will play the winner from MVG and The Power, while Gurney will face off against Snakebite tomorrow from 7pm.

No prizes for guessing the outright favourite, who is by now a super odds-on shot at 2/5 with both Bet365 and Betway. We’re talking bout MVG naturally and, under normal circumstances, a Wright v van Gerwen final (4/6, Bet365) would look the safe bet, but with Gurney in such fine form right now, he could easily make the Sunday’s final two and is 2/1 to beat Peter Wright tomorrow night. A Gurney/van Gerwen finale is worth 7/2 with Bet365.

‘Snakebite’, has a best price of 7/2, also with Betway and Bet365, for the outright tournament win, while Daryl Gurney, showing fine form, is on offer at 10’s across the board.

‘The Power’ and his strong Blackpool following will be hoping he rolls back the years and takes the tourney, and MVG before that. He is 12/1 to for the outright win and 4/1 to beat Mighty Mike tonight. ‘Jackpot’ Lewis can be picked up at 20/1 and his opponent tonight, Norris, is 66/1 with SkyBet.

He came, he saw, he conquered – as expected, Michael van Gerwen took down his second World Series of Darts title inside a week after beating Daryl Gurney 8-6 in the final of the inaugural US Darts Masters in Las Vegas.

It was another imperious display for Mighty Mike, putting on a show in Sin City, dropping only the one leg as he dismissed Chris White, Dave Richardson and Gerwyn Price before moving onto Gurney.

Northern Irishman Gurney, making his first appearance in a World Series event, had overcome two out of the world’s top three in both Peter Wright and Gary Anderson to make it to the final. Once there, he fared little better than the others paired with MVG, immediately going 2 legs to zero down, the first of which was closed out by the Dutchman with a 124 checkout. Gurney rallied though, just as he had against world number two Gary Anderson in the semis, and took five of the next six legs to move into the lead.

By the tenth leg, however, MVG was back in charge courtesy of a 112 finish and a 13-darter, after which the Dutch star won four straight legs on the bounce to put him 7-5 ahead, before a closing and definitive leg was taken by van Gerwen by way of a 98 average and 12-darter finish to treat the Nevada crowd and help himself to back-to-back World Series triumphs.

This Saturday at the Winter Gardens Blackpool, the biggest darting event of the summer gets underway as the 2017 Darts World Matchplay takes place from July 22-30, live on the Sky Sports Action HD. This year the tournament boats a new record £500,000 prize money, £115,000 of which will be awarded to the champion, with a £10,000 bonus on offer for a nine-dart finish.

As for the match action, it’s another ex-champion, James Wade, along with top stars Gary Anderson and Peter Wright, who will go in the tournament’s first session on Saturday. In all, 32 players will be competing with the first-round split across the opening three days with a double session on Sunday. It’s the second of these sessions that legendary 15-time Matchplay champion Phil Taylor gets his final ever Blackpool challenge underway before retirement, when he takes on UK Open finalist Gerwyn Price.

The same session also sees Dave Chisnall and Raymond van Barneveld launch their campaigns before Monday night when Michael van Gerwen, the 4/6 favourite with Bet365, begins his quest for a third successive World Matchplay win, and, as ever, it’s hard to disagree with the rampant Dutch giant.

The second round is split across Tuesday and Wednesday with the ever-thinning field progressing to the quarter-finals which are then split across Thursday and Friday, with the semi-finals on Saturday before Sunday’s final.

Scottish star Gary Anderson has seen his Betway odds cut to 5/1 following a kind draw, with Wright the third favourite at 6/1 with Bet365. Taylor on the other hand can be picked up for 22/1, also at Bet365, as he seeks a golden goodbye in Blackpool. Be warned though, that neither Taylor, who could face Raymond van Barneveld in round two, or MVG who will likely meet Kyle Anderson or Simon Whitlock on Wednesday, have been given the easiest of routes to the final.

Traditionally, there have been early eliminations for seeded players in round one here so be on the lookout for potential upsets again this year. Can Steve Beaton rewind back the clock and overcome Adrian ‘Jackpot’ Lewis? It’s worth 9/4 with Skybet. Also, do any one of Sunday night’s fixtures have the potential to cause causalities to the big names? That said, Skybet are offering 5/2 on either Peter Wright or Gary Anderson facing off against MVG in next Sunday’s final in separate forecast bets that are worth looking at. Likewise, you can get 33/1 on either of the Scottish pair meeting up with Phil Taylor.

Now 24 years old, the Matchplay has still only ever been won by seven different players in its lifetime. Larry Butler, Colin Lloyd, Peter Evison and James Wade have one title each, while Rod Harrington has another two. The other seventeen tournaments have been split 15-2 between Phil Taylor and Michael van Gerwen. If you fancy this record to be broken then pay attention to Skybet’s ‘new winner’ special worth 5/4 should anyone but those two win the tournament.

It’s also worthy of mention that the same sportsbook is offering nationality bets on the winner, 5/4 Dutch, 6/4 Scottish, 3/1 English and 16/1 other. 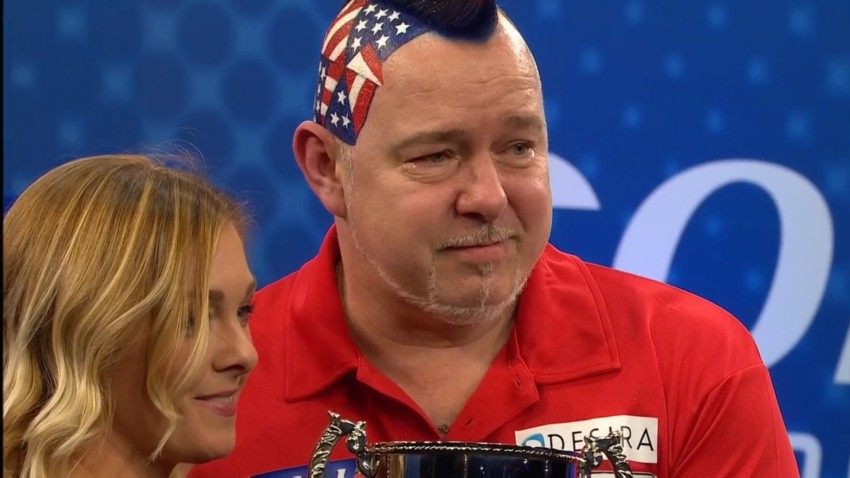 It’s an exciting week in the world of Darts as worlds collide when Britain’s weirdly popular pub game turned pro, Darts, meets the glitz and glamour of Vegas for inaugural hosting of the US Darts Masters and before that the North American Championship. Darts and Vegas have met before of course, back in the days of the now defunct Desert classic but this stopped in 2009 having run for seven successful years as the sport found new fans over the Atlantic. But now Darts is back and bigger than ever.

For the next five days, at the Tropicana casino resort in Las Vegas, the best darters in the world will descend on Sin City for a festival that culminates in the U.S. Masters event next weekend. That is with the exception of Phil ‘The Power’ Taylor who caught a sickness in Shanghai last week and has since withdrawn his participation in Nevada. Taylor’s place in the US Masters has been taken by seven-time PDC Premier Event champion James Wade. Taylor began to feel unwell as he was narrowly beaten in the quarter finals by Michael van Gerwen where the Dutchman clawed his back into the game after finding himself 5-0 down to the 16-time World Champion Taylor.

Naturally, MVG went on to win the whole event in China, just as he did last year, this time whitewashing a stunned Dave Chisnall in the final of his second World Series event of 2017. Having taken out James Wade in the semi-finals, Mighty Mike moved on to his next prey, Chizzy, who was unable to answer back from the relentless stream of successful checkouts from van Gerwen. In fact, Chisnall, who was making his seventh appearance in a televised final, was restricted to one lone shot at the bull in the entire match as his rival, the world number one, confirmed victory with a 102.77 average.

Now, the eight PDC merit players (without Taylor) meet up with eight qualifiers to play out the U.S Darts Masters at the Tropicana Las Vegas on July 14-15. Before then, on the 13th of July, there will be the North American Championship. Here, eight players from Canada and the US will play off over one day for a domestic title, with the winner earning a place in December’s World Darts Championship at the Alexandra Palace, lovingly known to us Brits as the Ally Pally.

Betway’s offer of 13/10 for the field against Michael van Gerwen is as good a place to start as any, given the imperious form shown by the big Dutchman who is 8/13 in all three of our sportsbooks. It is hard to look beyond MVG who will want to make a new set of fans in the US as well as adding yet another title to his swollen collection.

With Phil Taylor, a five-time winner of the Desert Classic, having pulled out due to an illness picked up in Shanghai, and Raymond van Barneveld, also a Desert Classic winner, still bedding in a totally new set of darts, the field either tightens or opens up depending on your view point.

While Barney is a best price of 20/1, only two of the world’s top three sit between him and the other Dutchman, MVG’s hot odds-on favourite. Gary Anderson, who has been playing well enough all year with little to show for it, is available at 9/2 with Betway, while Peter “Snakebite” Wright, who I fancy to make the final as well as winning a new army of fans, is 9/2 at Skybet, Bet365 and Betway. There is no Adrian Lewis or Dave Chisnall here meaning James Wade, a replacement for Taylor and a decent outside shot if ever there was, the next up in the betting at 28/1 with Bet365 before Gerwyn Price who is a 33/1 shout at Skybet.