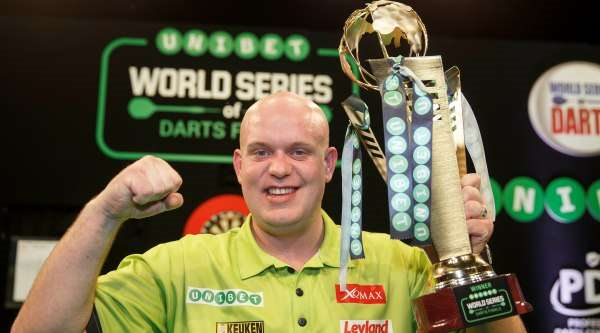 Starting tonight and lasting for three days, the final events of this year’s European Championship at the Ethias Arena in Hasselt, Belgium gets underway.

The £400,000 tournament brings together the top 32 players from this year’s ten PDC European Tour events so far, but all the focus, as ever, is on the Dutch darts master that is Michael Van Gerwen, gunning here for his third European Championship in a row.

Van Gerwen, who staged a long-remembered comeback in last year’s final against Gary Anderson, has won over half of this year’s ten European Tour events already. Not that he needed it, but this ensures Mighty Mike’s top seeding here. Despite this, MVG still has a more than challenging opening clash against 2012 champion, Simon Whitlock.

Four-time winner of the event, the legendary Phil ‘The Power’ Taylor faces seventh seed, Alan ‘Chuck’ Norris, who earnt his ranking courtesy of his victory in this year’s final European Tour event in Germany a fortnight ago and, while Norris has found form, Taylor’s class should see him through.

Another round one high profile clash is the coming together of reigning world champion Gary Anderson of Scotland and England’s James Wade, the latter taking down a European Tour event in Hamburg back in May.

While Adrian ‘Jackpot’ Lewis sits out the event, which will be screened live on ITV 4, other big names on display include Peter ‘Snakebite’ Wright who faces Justin Pipe first, and Dave ‘Chizzy’ Chisnall who meets Kyle Anderson this evening.

It goes without saying that Michael van Gerwen is the favourite, with a best price 5/4 at SkyBet to win a third successive European Championship title. SkyBet dig the deepest again for second-favourite Phil Taylor, who enjoyed success in the fifth leg of the tour in Vienna back in June.

They are laying 4/1 on The Power, who finds himself in the other side of the draw to MVG. Should these two make Sunday’s final, you can back an MVG v Taylor match off at 100/30, again with SkyBet.

For a little outside punt, Peter Wright can be backed at 14/1 at both Bet365 and Betway, while the latter are offering the best price on Dave Chisnall at 16/1. Discounting the two favourites, Snakebite and Chizzy are both sound bets, but it’s possibly Gary ‘The Flying Scotsman’ Anderson that might be worth a punt.

If you are feeling brave, SkyBet’s RequestABet format has produced the unusual selection: Chris Dobey to beat Phil Taylor in the second round of the European Champs at 14/1, which, if it pays off, surely deserves better reward.

If MVG does produce the goods as predicted, then the same RequestABet machine has generated  Michael Van Gerwen to win the European Championship, World series finals, Grand Slam & the World Championship at 8/1, in which case, should you fancy it, jump on early.

Round One (Best of 11 legs and seeds in brackets) 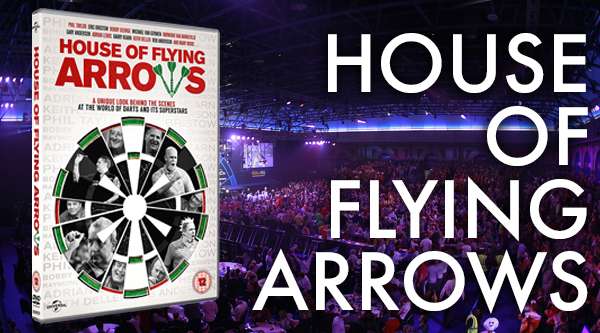 In a demonstration of how far the game has come, a new documentary that charts the phenomenal rise of darts was released last week. House of Flying Arrows aims to show darts’ journey from smoke-filled pubs to one of Sky Sports’ most valuable assets, where main performers like Phil ‘The Power’ Taylor make millions.

The game itself has changed very little since starting out as a crusty pub favourite over a century ago and yet, despite beginning life with a less than glamorous image, darts has become one of the world’s fastest-growing sports, drawing in the huge crowds that help to create those unique atmospheres we have become familiar with.

Today’s players are household names who have all made big money and the film charts this rise, both before and after the crucial split between the PDC and BDO. Stars that have played either side of the great divide, names like Eric Bristow, Bobby George and Michael van Gerwen, all talk openly in the film which is available for digital download now.

One name sadly missing from the documentary, though, is a man without whose input none of the above would have happened.

Side Waddell: the Voice Of Darts

Sid Waddell was born the son of a miner in Alnwick, north of Newcastle in 1940. When Sid died, almost 72 years to the day after his birth, tributes came in thick and fast on social media from the likes of TV personality Stephen Fry, politician John Prescott and footballer Wayne Rooney – all with good reason too. 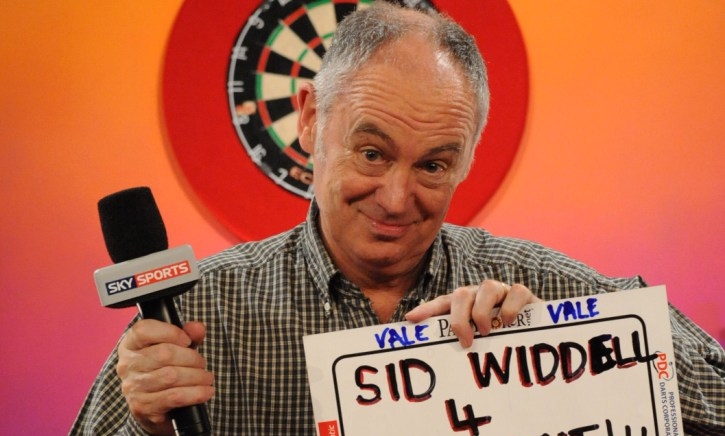 From humble roots, his intelligence had taken him far; as far as Cambridge University, in fact. There, they failed to breed the working class out of him and Sid spent more time drinking and playing darts than studying, almost quitting entirely at one point to pursue a career as a folk singer.

Fortunately, academia’s loss was darts’ gain as intelligence and working class wit fused together to give darts a powerful driving force on its rise to the top.

Next up for Sid was show business. Working as scriptwriter, he created the classic kids football show Jossy’s Giants and, as a TV producer, even began making documentaries for Iranian TV. Then, in 1972, he came up with the idea that would lead him down the path for which we remember him so well: The Indoor League.

The rise of televised darts

Not long after, the BBC wanted to begin pushing darts and, against popular opinion, drafted in Sid as their star voice, providing him with the chance to became one of the commentators on the first World Professional Darts Championship in 1978.

His career was launched and viewers soon began to follow. This was his life for the rest of his days, wheeling out classic quotes en masse in the most Geordie of tongues, long after the PDC–BDO civil war of the early 1990s and subsequent Sky Sports boom.

Among all the iconic sports commentators that have dominated coverage of their game down the years, few, if any, can boast like Sid Waddell what a difference their input made to their sport. During his reign, he played a huge role in its transformation from an unfashionable and unloved pub game that many people wouldn’t even have classed as sport, to the international brand it has developed into today, as celebrated in the new documentary.

Like all the finest broadcasters, Sid Waddell’s darts commentaries were about his game, but also about much more than that too. He left us four years ago but his legacy lives on as does the memory of some of his zinging one liners. 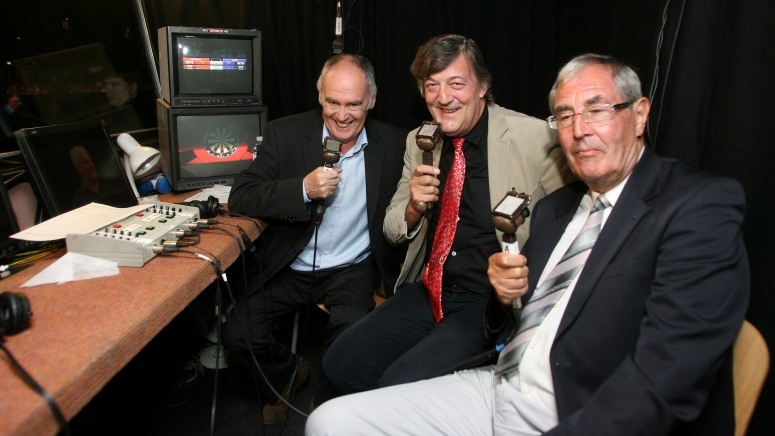 Another blank fortnight for televised darts waits ahead but the PDC European Tour gets underway today and concludes this year’s run. 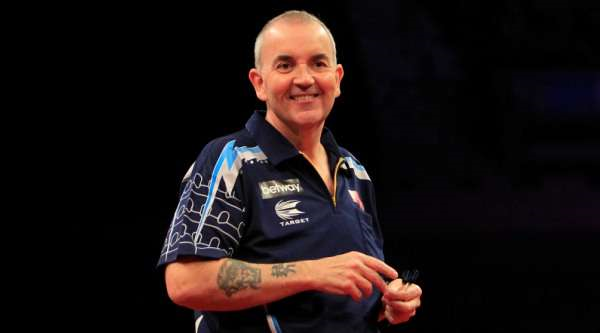 These heavy hitters won’t start playing until Saturday’s second round and MVG, who has enjoyed great success on the Euro tour this season, is a whopping odds-on in every book. For those looking for an outsider, Peter Wright can be picked up at 8/1 at Betway.

A look ahead at the schedule

Elsewhere, the lack of darts on TV does give us a chance to catch our breath and look forward to the remaining few events of the year; the last of which, as ever, is the big one: The Darts World Championships, which takes us into the new year.

Before then, we have televised events right through to European Championship which takes place at the back end of October. The first major tournament in the schedule is the early November World Series Darts Finals which will take place in Glasgow.

There, at the Braehead Arena, the top 12 players in the rankings will compete with the eight PDC players that have taken part in the entire 2016 PDC schedule.

This is a 24-player event where the other half of the field will be made up of highly-rated international prospects as well as other qualifiers and invitees. Robert Thornton and Michael Smith are two of those invited and will be joined by Michael Smith and Dutchman Jelle Klaasen. Austria’s Mensur Suljovic makes up the last of the four Order of Merit qualifiers.

The eight selected as global prospects will be announced at some point in the near future, while the final four players will be revealed according to the PDC Qualifiers for Tour Card Holders which will take place in Barnsley on Sunday October 23.

The first round will take place between 16 players before the eight big boys step up for round two and we will bring you some betting tips nearer the time.

After Glasgow, there is the Darts Grand Slam and the Darts Championships for the players, both youth and full, before the best players in the world gather at the Alexandra Palace (Alley Pally to you and me) to take part in the festive favourite PDC Darts World Championships.

The best darts bets for December

For those keen on an ante post betting, prices are already live at SkyBet, Betway and Bet365 but they are currently pulling no surprises.

As the weeks move forward and the smog lifts, betting should become clearer and hopefully, together, we can find some value in the market.

Until then, it might be worth grabbing Mighty Mike at 11/10 while you can. Only SkyBet and Betway are currently offering this and it might not last long, so best be speedy if you fancy the Dutchman to finish the year in much the same way as he played the rest of it.

Last year’s winner and two-time world champion, Gary ‘The Flying Scotsman’ Anderson is 5/1 at both of the same two bookies as is Phil ‘The Power’ Taylor – but, for this, switch SkyBet for Bet365.

Another two-time winner is Adrian ‘Jackpot’ Lewis who has drifted out to 16s at Betway where you can also jump on Peter Wright early doors for 20/1, just as he is at SkyBet and Bet365 also.